Immediate Action is needed to help pass the NY DREAM Act. We just received this urgent alert from the NYIC:

Action Alert: Tell Governor Cuomo and Senate Majority Leaders to include the NYS DREAM Act in the final budget!

With less than two weeks remaining before the April 1st New York state budget deadline, the New York DREAM Act is in a race against the clock to make sure the legislation is included in the budget for 2014. We are urging Governor Cuomo and Senate Majority Leadership to take a stand and include the New York State DREAM Act in this year’s state budget.

Will you take a moment today to call Gov. Cuomo and your Senate Majority Leaders, Jeff Klein and Dean Skelos, and urge their support for the New York State Dream Act (S.2378).

“Each year, thousands of young people in New York graduate from high school with little hope of pursuing their dreams of higher education because their status makes them ineligible for financial aid.  While we wait for Congress to pass immigration reform, New York must take action to address the needs of these students by passing the New York State DREAM ACT (S.2378).  As your constituent, I am asking you to include the New York State DREAM Act in the budget.”

Below are additional ways to show your support; please share among your lists, members and post on social media:  Here are sample tweets.  Please post as often as possible in the next few days; repetition and consistency is key to get our message across!

Ask @NYGovCuomo to add #NYDREAMAct to the budget; ALL students deserve a chance to go to college!  @JeffKleinNY @SenatorSkelos put #NYDREAMAct in the Senate One-House Budget Resolution and ensure its final passage in the NYS Budget!
.@JeffKleinNY @SenatorSkelos we are less than 2 weeks away from the #NYSBudget please include the #NYDREAMAct
Education leads to better-paying jobs,  putting #NYDREAMAct in the #NYSbudget would benefit the State by providing higher tax payments. -@NYGovCuomo
.@NYGovCuomo add the #NYDREAMAct to the Budget, all students deserve the opportunity to go to college! 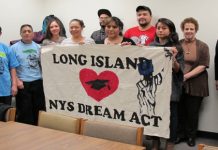 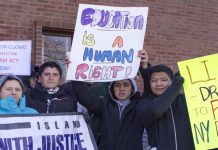