A new website entitled “Somos Dreamers/We Are Dreamers” has been launched by ImpreMedia, the publisher of El Diario-La Prensa and Los Angeles’ La Opinión, and features pictures and stories in English and Spanish of young undocumented immigrants. 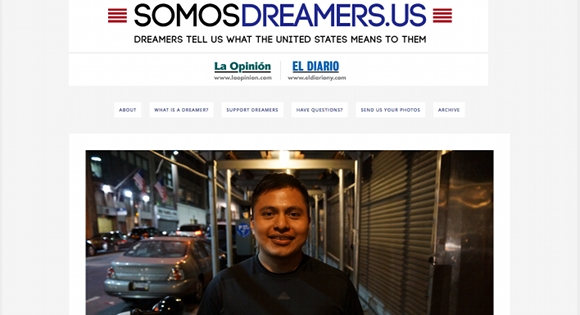 “We Are Dreamers” is a national photographic project created by impreMedia Content Labs that puts a face and a voice to one of the most present groups that are being affected by the discussion of Immigration Reform, and in general public debates.

Through a photo and a small text, we aim to focus on demonstrating who these young adults are and what the United States means to them.

According to the website, there are about 2.1 million dreamers in the U.S. One million of them are eligible for the Deferred Action for Childhood Arrivals (DACA) program ordered last year by President Obama, “which means that they will not be deported and may have a work permit for two years, with possibility of renewal.”

The congressional DREAM Act bill would result in the possibility of acquiring a temporary residency as a first step in obtaining U.S. citizenship. New York State has it’s own version of the DREAM Act which would make undocumented immigrant students eligible for tuition assistance.