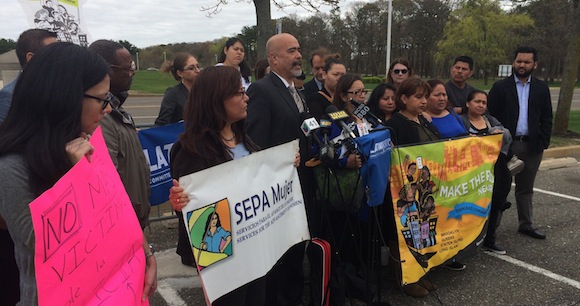 At a press conference on Thursday, nine social justice organizations announced details of a federal class action civil rights lawsuit filed against the Suffolk County Police Department (SCPD). The lawsuit alleges that the department condoned a 10-year crime spree against Latinos, even as it was being investigated by the Department of Justice (DOJ) for bias against the Latino community.

Twenty-one Latino Long Islanders named as plaintiffs claim that multiple SCPD officers systematically targeted them and other Latinos for unfounded, race-based stops. During these stops, the individuals were either robbed or given unjustified traffic citations. They also charge that the SCPD permitted this practice to continue within its ranks for 10 years, and that the crime spree created an atmosphere of fear that left many Latinos afraid to drive, leave their homes, or interact with the police.

“The people that we represent in this lawsuit are law-abiding people, trying to work, trying to get to and from work, and to and from to visit family and friends in Suffolk County,” said Juan Cartagena, president and general counsel of LatinoJustice PRLDEF, a civil rights and legal defense group that filed the suit along with the law firm Shearman and Sterling LLP. “They are honorable people. They came to this country looking for a better way.”

According to Nancy Trasande, senior counsel for LatinoJustice, the racial profiling and abuse manifested itself in three ways: illegal checkpoints, illegal traffic stops, and “stop-and-rob” schemes.

The lawsuit names Suffolk County as a defendant, along with the police department, Commissioner Ed Webber, Lt. Milagros Soto, and multiple John Doe officers and supervisors. It comes one year after former SCPD Sgt. Scott Greene was arrested after being caught on camera during an undercover sting operation while conducting one of the above-mentioned “stop-and-rob” schemes, in which he would take money from a Latino driver. Greene is also named as a defendant in the lawsuit.

Community organization Make the Road NY and LatinoJustice interviewed dozens of victims who admitted to being too afraid, or thought it pointless, to complain about widespread police criminality. The victims assert that one or more officers would, in clear violation of police rules, get a hold of the victim’s wallet and then return it a few minutes later with one or two hundred dollars missing.

Yet some victims have come forward citing incidents as recently as this past week.
“This problem is continuing today, even after the DOJ finished its investigation,” said Foster Maer, senior litigation counsel for LatinoJustice. “Several of our clients were robbed after Sgt. Greene was caught. This harassment continues.”

He cited an incident in which one client was pulled over last week near where Greene used to conduct his illegal activity. The resident, who is limited English proficient, requested an interpreter, which should have been provided in accordance with two Suffolk County executive orders signed in 2013. Instead, she was given five frivolous tickets, including ones for obstructed view inside the car, defective tire, improper turn, and driving without a license (which she had).

“So any idea that this is a problem in the past, forget about it,” he added.

LatinoJustice also claims the DA’s office has audio tapes of an officer, other than Greene, committing and orchestrating this criminal activity.

The crimes committed by Greene and alleged others took place while the SCPD was under investigation by the DOJ following the hate-crime killing of Ecuadorian immigrant Marcelo Lucero. One year after the start of the DOJ investigation, an immigrant laborer was killed and another brutally beaten in another apparent hate crime that remains unsolved.

Maer said that SCPD waited two weeks after the conclusion of the DOJ investigation to conduct the sting that resulted in the arrest of Greene—18 months after the evidence was brought forward.

Maryann Sinclair Slutsky, executive director of Long Island Wins, said that this issue does not affect Latinos alone—it affects all of Suffolk County.

Speaking through an interpreter, Frank Sprouse, a Bay Shore resident and member of Make the Road NY, called for all Latinos in Suffolk County to come forward with evidence of abuse. “We demand that the Suffolk County Police Department change the treatment of our community,” he said. “We are here today in support of those members of the community who have come forward and shared what they have been victims of because we are tired and we need to be reporting these crimes.”