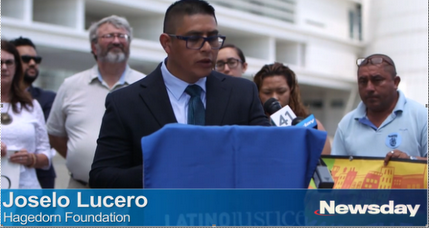 More than two dozen representatives of 10 Long Island advocacy groups stood before the federal courthouse in Central Islip Wednesday to demand that a four-year-old hate crime not go unsolved.

The group called on the DOJ to complete a full investigation of the brutal attack in 2010 that killed Jose Sanchez and left Antonio Tum disabled. They also demanded the DOJ investigate the failure of the Suffolk County Police Department (SCPD) to solve the crime.

Some details of the attack and the police’s failure to fully investigate the crime were recently published in an article in the New York Times. But much information about the crime continues to be hidden from the public.

Juan Cartagena, president and general counsel for LatinoJustice PRLDEF, said the issue must be addressed by the federal government “because we are losing confidence that the local government here can actually bring justice to the Latino residents of Suffolk County.”

Several advocates admitted that while positive improvements have been made by the SCPD, much more is still needed. For example, a Memorandum of Agreement with the DOJ in 2013 included a requirement to file a Self-Assessment Report on its compliance with the terms of the Agreement. The deadline for this was two weeks ago, yet the report has not been made available and explanation has been offered about its failure to do so.

Joselo Lucero, brother of Marcelo Lucero, whose murder ultimately led to an investigation of the SCPD by the Department of Justice (DOJ) and subsequent settlement, said the murder of Sanchez affects him “personally and emotionally.” The failure to properly investigate the Sanchez murder while under the scrutiny of the DOJ, Lucero said, has caused him to lose faith in the federal agency.

The day before the press conference, Suffolk Police Commissioner Edward Webber reached out the advocacy community to request a meeting with himself and Det. Lt. Stephen Hernandez, head of SCPD’s Hate Crime Unit next month. No other details about the meeting were available as of press time.