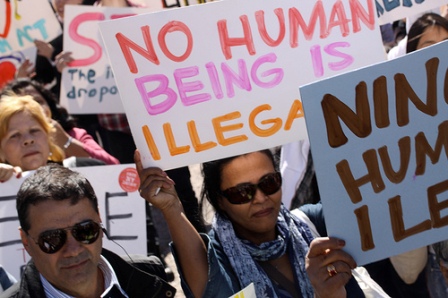 Last Friday, I had the honor to speak about the fight against hate crimes in Suffolk County as part of the national Immigration Law Teachers Workshop held at Hofstra Law School. There were roughly 150 law professors and clinical instructors there, four of whom had once worked within the walls of my organization, CARECEN. One speaker noted that the first major study of immigrants in suburbia, “American Dreaming,” had been done right here on Long Island by CARECEN’s own Sarah Mahler. So it felt like a reunion of sorts for me.

Two other speakers also spoke with me about the rise of anti-immigrantism in suburban contexts, in places as far afield as Connecticut and Texas. In all the examples presented, hatred of immigrants was not just some natural reaction to changing demographics, it involved politicians fostering a climate of hatred in an attempt to gain votes.

When I spoke to the conference about Suffolk County during the Levy years, my presentation seemed to echo the pathologies that we have seen in other parts of the country. But the end of the story was quite different. I described how immigrant organizations and their allies fought back and eventually won the struggle for an end to immigrant bashing.

Several of the professors in attendance said that the Long Island example, in which groups like CARECEN and the Workplace Project devoted huge amounts of resources to countering hatred and where organizations were able to unite under the common banner of the Long Island Immigrant Alliance, was one that needed to be followed all over the country.

Four years ago, we were an example of the horrible price of hatred. Today, we are a symbol of change through struggles.