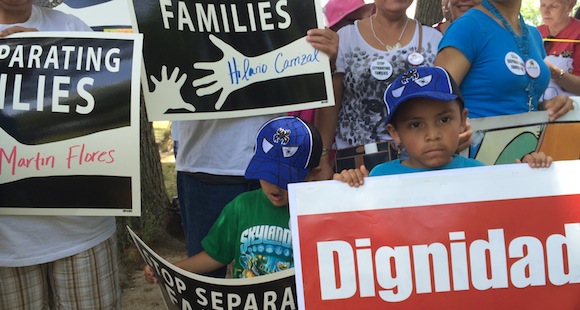 Immigrants and community members stood side by side on Saturday, June 28 to tell Congress that time has run out and that, come November, they will be held accountable. The event, held at Ross Park in Brentwood, commemorated the one-year anniversary of the Senate’s bipartisan immigration reform bill, on which Congress has failed to act.

Many participants gave deeply personal accounts of how this issue is affecting their lives and their families.

Erika Brooks, another Brentwood resident, was brought to tears as she shared what it must be like for children to lose their parents to deportation. It is an experience she understands all too well. “I haven’t seen my mother in nearly four years,” she said. “I miss her touch. I miss talking to her.”

Participants were united in their message that the immigration reform movement was not slowing down. It is gaining strength with each day that goes by without action. And it will not stop until comprehensive immigration reform has passed, including an end to rampant deportations and a pathway to citizenship for the 11 million undocumented who are already woven into the fabric of our society.

These demands are “very reasonable,” according to Dr. Yousuf Syed, who spoke on behalf of the Islamic Association of Long Island, the oldest Mosque on Long Island. He explained, “All we are asking is that our rights be given to us in an honorable way.”

But emotions alone won’t bring about change, noted Marcy Suarez, a recent graduate of Brentwood High School. Still in her cap and gown, she argued that only voting could achieve the change needed. As the rally concluded, she joined other activists who spread throughout Brentwood to register new voters and make the community’s voice heard this November.