Back in the 1980s, hundreds of people were involved in helping Central American refugees. Some taught English at the Methodist church in Hempstead, others volunteered with Parish Outreach at St. Brigid’s in Westbury. Others, like Father Bill Brisoti, tried to set up a shelter for those without a place to stay. While in its earliest days, there was a great spirit of community among those of us who worked with refugees, by 1985, fear had begun to take hold.

The Sanctuary Movement sometimes described itself as the Overground Railroad. Like the old Underground Railroad, it helped shunned people reach freedom. But it did so publicly. The pressure on the Sanctuary Movement mounted appreciably after the Reagan Administration started the prosecutions of more than a dozen Sanctuary workers in the Southwest. I remember people wondering if there were informants among us trying to gather information to use against us. Later evidence would show there were.

Many of us thought that the prosecutions in the Southwest were only the opening wedge. The Reagan Justice Department meant to silence the critics of its refugee policy because by exposing the abuses of Central American refugees by the INS, we were indicting the government’s support for death squad rule in El Salvador and Guatemala.

For the refugee defense lawyers, jail was not even our biggest fear. Judges were threatening to have our licenses lifted for simply defending Salvadoran and Guatemalan refugees in immigration court.

A group of lawyers began talking about ways to fight back against the government’s assault. They decided that since the Sanctuary Movement would not have been necessary had the Justice Department been doing its statutorily mandated job of fairly adjudicating asylum claims from El Salvador and Guatemala, they would file a lawsuit against the Attorney General, Ed Meese, challenging the entire asylum system. If it did nothing else, it would get enough media attention to show the American people that the asylum process had been perverted by the foreign policy concerns of the Reagan administration.

The lawsuit, American Baptist Churches v. Meese, would bring together a remarkable team of lawyers, including Mark Vanderhaut and Lucas Guttentag, who would eventually revolutionize our country’s humanitarian protection system. But at the time, the lawsuit looked to many of us like a hopeless last gasp before we were all sent to jail. 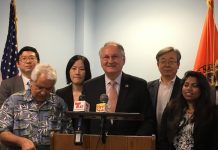