On Monday, the Supreme Court struck down several parts of Arizona’s “show me your papers” law, SB 1070, but let stand one of the central tenets, the provision requiring Arizona police to check the immigration status of suspected undocumented immigrants and report suspects to federal immigration officials.

While it’s uniquely problematic that Arizona police officers are now required to serve as amateur immigration agents, in a sense, we already have a similar system in place nationally, authorized by the federal government.

Secure Communities is a widespread immigration enforcement program that requires local authorities to share with Homeland Security the fingerprints of any arrestee, regardless of the severity of the crime or whether the person is found guilty. The program is mandated in jurisdictions across the country, and the Obama administration’s goal is to have it cover the entire US by 2013. Even in places like New York, where Governor Cuomo has tried to opt out of the program, the federal government has forced state governments to comply.

Secure Communities was initially promoted as a way to catch bad guys, targeting serious criminals. But in practice, it’s far different. Long Island, unfortunately, is a good example of the program’s failings, according to Amol Sinha, director of the Suffolk Chapter of the New York Civil Liberties Union.

“In New York State, Long Island has the highest numbers as to people who are removed from the country, but the vast majority, over 80 percent, are either non-criminals or low-level offenders,” Sinha said in a recent interview.

Under Secure Communities, any time a police officer arrests you—and they can arrest you for missing a stop sign; remember, a traffic ticket is in lieu of an arrest—your fingerprints are sent to a Homeland Security database. If the search turns up a prior immigration infraction, you’ll be placed into deportation proceedings, regardless of how many decades you’ve been in the country and whether or not you were even guilty of a crime.

The program gives police the de facto power to deport someone, whether police want that power or not. Undocumented immigrants who are victims of a crime may be hesitant to come forward, fearing arrest and subsequent deportation. And when community members stop trusting police, it makes it more difficult to keep everyone safe.

Despite the impact on public safety, few Long Islanders have even heard about Secure Communities, much less examined its long-term effects. For that reason, organizations in the Long Island Immigrant Alliance, including Long Island Wins, are embarking on a Secure Communities education campaign this summer. One of the events will be a July 27 community forum in Hempstead, hosted by the Workplace Project.

At a press conference on Tuesday, Elizabeth Ulcuango, an Ecuadorian immigrant living in Patchogue, spoke about her own experience as a survivor of domestic violence and why she believes immigrant women will be more hesitant to come forward if they’re facing the threat of deportation. 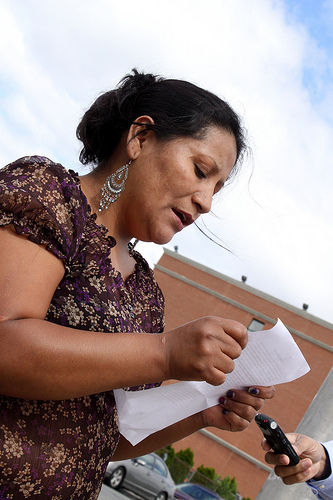 I also spoke to Nadia Marin-Molina of the National Day Laborer Organizing Network  about how Secure Communities functions:

Here are more photos from the press conference: