There will be a rally on Wednesday, May 18, from 11am to noon calling for New York State to withdraw from the Secure Communities immigration enforcement program. The rally will be outside the offices of Gov. Cuomo at 633 3rd Avenue at 41st Street in Manhattan, and is supported by a broad coalition of organizations. 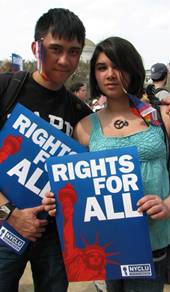 Since Illinois withdrew from the Secure Communities program earlier this month, the pressure on Gov. Andrew Cuomo has increased. Secure Communities requires that local police departments run fingerprints of people they arrest against an Immigration and Customs Enforcement database. Over the last two weeks, more than 100 members of the clergy and 38 New York elected officials sent requests to Cuomo urging withdrawal from the program.

Diane Steinman, an organizer of the vigil, spoke about the action last week:

“We say to our Governor: Follow the example set by the State of Illinois and pull New York out of this program that is shattering the lives of immigrants while making New Yorkers less safe and secure.”

This week, Congressional Representatives Jose E. Serrano and Nydia M. Velazquez sent a letter to Cuomo that charges that New York joined Secure Communities “without a thorough investigation or public review of the possible consequences for the state, including decreased public safety, increased legal and fiscal liabilities and potential violations of New Yorkers’ civil rights.”

It has become clear that, during its rollout of the program, ICE made contradictory statements to the public and to government officials about Secure Communities and misled them about the agency’s policy on opting-out of the initiative. Representative Lofgren, joined later by Senator Menendez, has called for “thorough investigations into any misconduct, including possible violations of criminal law,” relating to the agencies’ deployment of the program. New York must withdraw from the Secure Communities program.