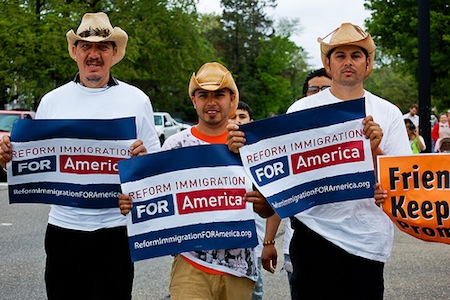 President Obama spoke at the National Council of La Raza luncheon in Washington yesterday. The speech coincided with news of the 1 millionth deportation of the Obama administration.

Obama told the audience that he wants to reform the immigration laws:

I share your concerns; I understand them. We are responding. We are enforcing flawed laws in the most humane way possible.

The crowd responded by chanting “Yes, you can.”

Obama continued, laying blame at the feet of his Republican rivals: “Believe me, right now dealing with Congress, the idea of doing things on my own is very tempting, I promise you. Not just on immigration reform. But that’s not how our system works. That’s not how our democracy functions. It’s not how our Constitution is written. Let’s be honest: I need a dance partner here and the floor is empty.” But the crowd was not completely convinced. A group of students stood during the president’s remarks, in a silent protest against his policies. And at a news conference afterward, La Raza President Janet Murguía said Obama had failed the Latino community.

After the speech, Janet Murgia, president of La Raza, referenced the president’s campaign promise to make immigration reform a top priority during his first year in office.

“We’re not satisfied the president has kept his promise,” she said. “On the issue of immigration reform, it’s fair to say that we didn’t hear anything new.”