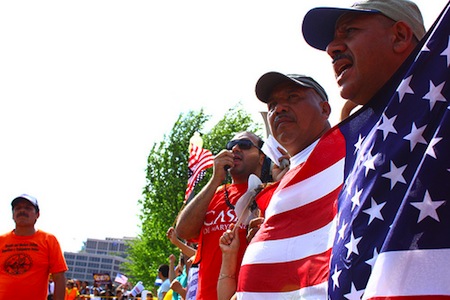 Anti-immigrant politicians like Lamar Smith have been trying to assure Republicans that Latinos don’t care about the immigration issue. New numbers contradict that assertion.

The Latino Decisions polling organization has released the results of a new survey of Latino voters identifying immigration reform as the top issue facing the Latino community.

More than half of those polled said they personally knew an undocumented person. When questioned about who they trusted more “to make the right decisions when it comes to immigration policy,” 65 percent of poll participants chose Obama and Democrats versus 19 percent choosing Republicans.

However, Latinos are not letting President Obama off the hook. They want him to take immediate administrative action to relieve the suffering of many immigrant families.

According to a report on the survey by America’s Voice: