Written in association with The Op Ed Project and originally published on The Huffington Post.

Like many people around the globe, I have been glued to the television watching the Olympic games. It’s not only watching athletes perform amazing physical feats that keep me engaged, it’s the players’ personal stories and the challenges they have overcome to make it to the international stage.

On August 1, gymnast Danell Leyva helped carry the US team to a bronze medal in the All Around. The son of gymnast parents who competed for the Cuban national team, Leyva entered the country as an undocumented toddler. His stepfather and coach Yin Alvarez, originally from Mexico, swam across the dangerous Rio Grande, risking his life and future like nearly 11 million other undocumented immigrants who now call the US home.

Though Leyva entered the country without papers, he and his family were able to legalize their status. Under the Cuban Adjustment Act of 1966, Cubans who make it to the US are automatically placed on the path to citizenship, regardless of how they have entered the country. Leyva’s story demonstrates the importance of investing in immigrants, and overhauling our antiquated immigration laws that keep most immigrants from reaching their full potential and contributing to our nation. Our response to Cuban immigrants proves that legislators are capable of creating humane immigration policy.

Leyva grew up and trained in Miami, home to one of our country’s most diverse immigrant communities. Unlike Leyva, other immigrant children who came to this country under similar circumstances have not been so lucky to be granted a visa or citizenship. Consider, for instance, the four undocumented university students who walked 1,500 miles from Miami to DC in 2010, in what they termed the Trail of DREAMs, to publicize the need for immigration reform. Each year it is estimated that 65,000 undocumented students graduate from US high schools. Instead of investing in this incredible source of human potential, we have closed the doors to them. Our society has continued to cast undocumented youth aside, and set them up for failure. Yet they continue to defy these odds.

The winners of the 2004 National Underwater Robotics Championship were four undocumented youth from a Phoenix, Arizona, high school. They beat out MIT with their underwater robot and created a national stir when they won. Given their victory, they all should have been offered prestigious scholarships and gone on to fruitful engineering careers. Instead, one is working as a carpenter, another registered in community college, and another is hoping to use his math and science education to secure work in Canada. 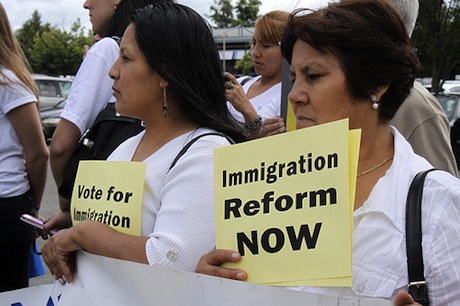 President Obama recently announced plans to allow undocumented youth to gain a two-year work permit if they have been here since the age of 16 and are not over 30, and have graduated high school, have a GED, or have served in the military. While the plan could possibly grant 800,000 undocumented youth much needed relief, it is still a short-term fix. What our country truly needs is immigration policies that allow the undocumented a pathway to citizenship. Many Cuban immigrants have been able to succeed and greatly contribute to our country because of favorable immigration policies.

Once we break the barriers, we will have millions of success stories like Levya’s. The Olympic games brings pride to our country. Players become national heroes, we invest in their stories; and young people like Leyva become all of our children. Undocumented youth are very much part of this country. It’s time we see all of them as our nation’s children and collectively celebrate their achievements as our own. We will be a better country for it in so many ways.

Cristina Tzintzún is the executive director of the Workers Defense Project, based in Austin, Texas.