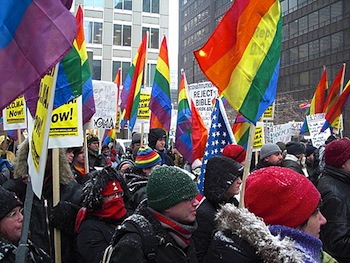 The decision by the Obama administration to stop defending the Defense of Marriage Act (DOMA) in jurisdictions where federal courts have challenged its constitutionality is already having an impact in the immigration field. In regards to immigration, the law bars immigration benefits for same-sex spouses, even if the couple is legally married in their state of residence.

One woman’s deportation to Argentina for overstaying her visa was halted when a New York immigration judge, Terry Bain, decided that further action should be stopped until the legality of the law is resolved. The woman, Monica Alcota, is married to US citizen Cristina Ojeda and has a petition for a green card pending.

Normally such applications would be rejected out of hand, but with the very legality of denying spousal rights to same sex couples under attack by the courts, Judge Bain decided to wait until December before the spouses were forcibly separated. They will have a status hearing at that time to determine the likelihood of success for the newlyweds’ immigration application.

There are thousands of couples like Monica and Christina who would have the chance to stay together if this woefully outdated law were vacated.