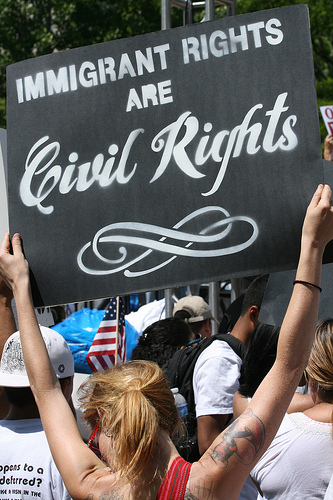 Yesterday, President Obama held a closed-door meeting on immigration reform with an array of leaders, including Mayor Bloomberg. Obama called the strategy session to try to restart last year’s stalled legislative approach to the issue, an approach that culminated in a narrow defeat of the DREAM Act.

According to The New York Times:

Mr. Obama summoned more than 60 high-profile supporters of the stalled overhaul legislation to a strategy session, looking for ways to revive it…. In the closed meeting, Mr. Obama argued that the overhaul would bring immigrant entrepreneurs to the United States and was a crucial piece of the economic recovery, according to several people who attended. He sought views on whether to try to pass smaller pieces of the massive overhaul, such as a bill that would give legal status to illegal immigrant students, or one that would increase visas for highly skilled foreign workers.

The president asked for help to “change the debate” to attract Republicans to support the bill. He said he could not pass the overhaul “if I am leading the debate alone,” according to a White House statement.

The White House drew some praise for the meeting.

“It was gratifying to hear the President reaffirm his commitment to immigration reform,” said Frank Sharry, the executive director of America’s Voice. “It shows that he is raising the stakes on the issue and underscores the fact that doing nothing is not an option.”

But Sharry emphasized that there is much the president can do outside the legislative arena to slow the bleeding in the immigrant community. He pointed to proposals for administrative changes that Obama could authorize with the stroke of a pen, halting the deportations of young people who would be eligible for the DREAM Act, as well as changes needed in the controversial Secure Communities immigration enforcement program.

Immigrant advocates have told me that they worry that the president may stake all of his political capital on legislation that is unlikely to pass in the Republican-controlled House, in order to focus anger among Latinos on the Republicans, while not using his own power to create better immigration policies.

With the exception of the Haitian TPS program, the only actions taken by the Obama administration on immigration have focused on amping up enforcement. The fear of advocates is that yesterday’s meeting may simply reinforce that approach.