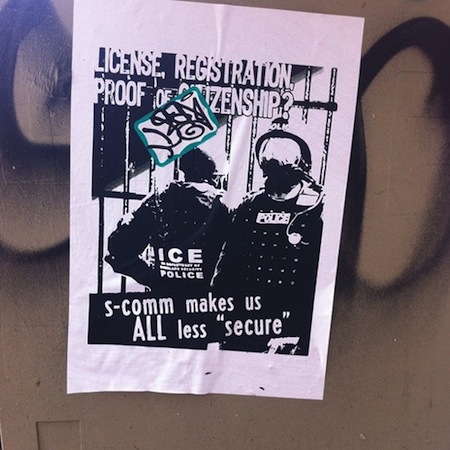 The program – which sends the fingerprints of any arrestee, guilty or innocent, to immigration officials—purportedly targets serious criminal offenders, but statistics from Homeland Security have shown that the vast majority of people deported through Secure Communities are low-level offenders or non-criminals.

With this in mind, New York State Governor Andrew Cuomo withdrew the state’s participation in late May, but the Department of Homeland Security has since declared that it will continue the program with or without the consent of individual states.

I was interviewed about the issue by the New York Public News Service yesterday. Click here for the audio, or read the story below:

NEW YORK – New Yorkers say they got plenty of busy signals on Monday when trying to call the White House to express their opposition to a controversial federal immigration-control program known as “Secure Communities.”

Ted Hesson, online editor with the immigrant advocacy group Long Island Wins, was among those calling to register a complaint. He says the program, which tracks fingerprints of people who are arrested, has failed to deliver on its promise to target dangerous gangs. Instead, he says, it is tearing immigrant families apart, across New York State.

“In the first quarter of this year in New York State, 80 percent of the immigrants deported through ‘Secure Communities’ had not been convicted of any crime. The program was targeting people who had not committed any crimes instead of what it had purported to do, which was to target serious criminals.”

Supporters of the program say it’s needed to combat serious problems like drug crime, but Hesson says statistics compiled by the New York Civil Liberties Union show the federal dragnet caught only a few low-level offenders, and mostly immigrants with no criminal records.

Hesson says a look at what’s happening on the ground indicates New York is getting the same message.

“New York State has withdrawn from the program, or publicly said that they would like to withdraw. But yet, Homeland Security, since that withdrawal, has just been proceeding ‘business as usual,’ with information-sharing and with deporting people through the program.”

Immigrants’ rights groups declared Monday a national call-in day for Americans to register their opinions about the “Secure Communities” program.

Governor Andrew Cuomo’s office had no comment as to what New York has been told by the feds about opting out.