In recognition of International Worker Rights Day on May 1, immigrant workers and supporters will be taking to the streets in Brentwood and Hempstead, calling for everything from fair wages to a moratorium on unjust deportations.

On Sunday, April 29, there will be a march for low-wage worker rights in Brentwood (click here for details). An organizer from Make the Road New York said they expect a turnout of 80-100 people.

Then on May 1, the Workplace Project continues its annual tradition of marching for immigrant rights in Hempstead. 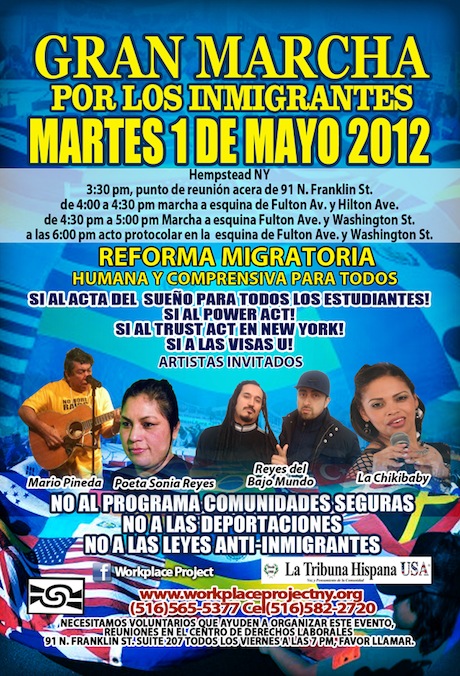 From Saul Linares of the Workplace Project:

This year’s march is dedicated to the repeal of Secure Communities, the federal immigration program that allows police officers to function as immigration agents. The federal government is trying to implement the program on the national level by the end of 2013.

In addition, May 1 is going to be dedicated to halting the deportations of immigrants who haven’t committed any crime, who are only unauthorized workers. In general, the march is in opposition of anti-immigrant laws.

On the other hand, the Workplace Project advocates for comprehensive immigration reform, for the majority of undocumented workers; the DREAM Act, for the students; and for all of the bills that benefit immigrants.

The immigrant rights march will kick off at 3:30pm at 91 N. Franklin St. and eventually make its way to a stage at Fulton and Washington, where there will be musical acts in support of the effort.