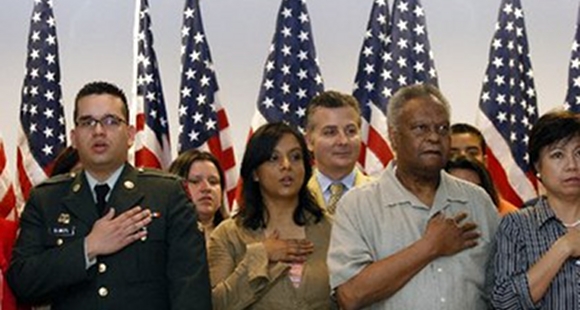 People often ask why today’s immigrants don’t assimilate to their new country as quickly as previous waves of immigrants. But this is yet another misconception when it comes to immigration.

Immigrant integration today is stronger than ever, as evidenced by numerous studies of language acquisition, naturalization rates, and home ownership.

Immigrants know that the key to success in this country is speaking English. That’s why so many immigrants learn English, and why English becomes the dominant language among their children and grandchildren.

Also contrary to popular belief, today’s immigrants are more diverse than ever. Less than one-third (29%) of immigrants in the U.S. are from Mexico. Another 28% are from Asia, with 24% coming from countries in Latin America and the Caribbean other than Mexico. A further 12% come from Europe and 4% come from Africa.

Finally, opponents of immigration reform often note that providing citizenship to anyone born in the United States has been an issue. Referred to in a negative sense as “anchor babies,” immigrants blame these citizens and their parents for many of the issues facing our country today.

However, eliminating birthright citizenship would mean tampering with the Fourteenth Amendment, which was passed after the Civil War to ensure that anyone born in the United States was a U.S. citizen, without regard to race or ethnicity. Attempting to pass a law that changed the rules of the game for children of undocumented immigrants would be unconstitutional, impractical, expensive, and complicated.

Hopefully this series answered your questions and has made it clear why we need immigration reform now.