Before I left Long Island with an educational delegation to the US-Mexico border in Arizona in May, I thought I knew everything about the problems that immigrants face in the United States. But I could not have been more wrong.

We’ve heard so much about the border — the fence, the violence, drugs — but we’ve managed to forget the real story.

By some estimates, thousands of migrants are dying in the desert each year trying to enter the US just so they can feed their families and have access to basic human needs such as clean drinking water and an education. Families are also being torn apart, with parents being separated from children and husbands separated from wives.

Despite the humanitarian crisis, migrants crossing the border are being treated as criminals, all because Congress refuses to reform our immigration laws. 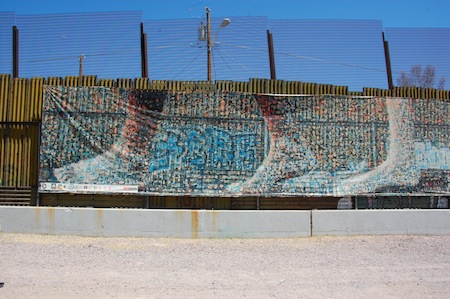 A stretch of the border fence in Nogales, Mexico. (Credit: Robert Silz)

The desert might seem far away from the Long Island suburbs, but it’s not. Some of those migrants risking their lives crossing the desert are heading here, hoping to find work or reunite with family members. Some won’t survive the journey.

Immigration isn’t a new topic for me. I’ve been an activist and very passionate on the issue since I was 16, and I’m about to enter law school to study immigration law.

I also have a personal connection to the issue. My parents came to Long Island with the hope of finding better jobs and a strong education for their children since they were unable to provide that for us in our home country, Colombia. Because of the United States’ broken immigration system, the only pathway we had available was to overstay a tourist visa we had obtained back in our home country. As a result, we were undocumented immigrants here in Suffolk County for eight years, consigned to the shadows and vulnerable to everything from hatred to deportation.

Even though we began the process of legalization in 2001 and my dad paid taxes, we were still considered undocumented and I wouldn’t have had access to things like state and federal financial aid for college.

To an outsider, it may be hard to imagine the life of an undocumented immigrant, but through­out that period I felt depression and shame. I once even contemplated getting married just so that I would be able to stay in this country, the only home I had ever known.

My experiences, however, didn’t prepare me for the realities that I found on the border. For starters, I learned that the US-Mexico border wasn’t always a battleground against immigration. Before 1994, people had moved with relative ease across the Arizona border for thousands of years. Yes, thousands.

But after the passage of the North American Free Trade Agreement that year, the border changed. Millions of farmers in Mexico and Central America lost their livelihood as US imports undercut their own crops. Nafta promised to create jobs for Mexicans in maquiladoras — new factories moving over the border from the U.S. But there weren’t enough factory jobs for out-of-work farmers, and some jobs paid no more than $6.50 a day.

As a result, immigration increased. But instead of reworking our immigration laws to support the changing migration flow, politicians opted to dump billions of dollars into militarizing the border. 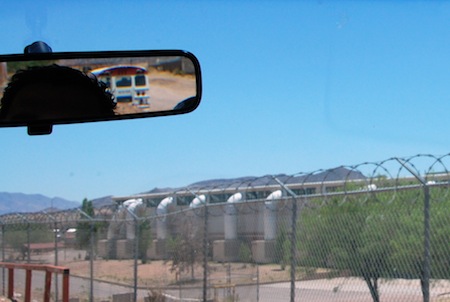 Driving past a maquila near Nogales. (Credit: Robert Silz)

We saw the effect of these policies firsthand at places like El Comedor, a soup kitchen in Nogales, Mexico, where recently deported migrants — who sometimes had no more than the clothes on their back — were able to find a meal and perhaps some hope for the future.

We heard stories from dozens of migrants who had lived around the country. Many had been torn away from their spouses and children who were still in the US. And even though many migrants had been deported more than once, they typically intended to try to cross the desert again. They did not want the American Dream. Like many immigrants on Long Island and here in East Hampton, they simply wanted to survive.

Not everything we learned was negative. In Nogales, we drove up dirt roads to visit Hogar de Esperanza y Paz (Home of Hope and Peace), an organization that provides approximately 120 meals a day to children whose parents work long shifts at the maquiladoras and can’t provide them with food. The organization’s mission felt truly inspirational.

We also met the co-founder of No More Deaths, a faith-based volunteer group that provides water and first aid to immigrants struggling to cross the Arizona desert. This may sound hard to believe, but in recent years anti-immigrant activists have actually fought against the water campaign, even going as far as pouring the water into the desert.

In the news, we see the politics of immigration: politicians like Suffolk County Executive Steve Levy calling the children of undocumented immigrants “anchor babies” and downplaying attacks against Latino immigrants.

But that kind of talk doesn’t get us anywhere. As I saw in Arizona, this issue isn’t simply about Republicans or Democrats; it is about caring for fellow human beings. People are dying in the desert: mothers, daughters, husbands, and sons, from adults to small children. 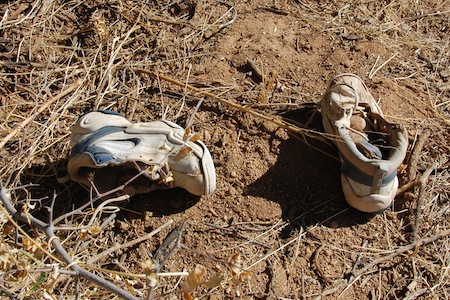 Sneakers likely left by a migrant in a part of the Arizona desert near Green Valley, Arizona. (Credit: Robert Silz)

We need to change our country’s immigration laws so that people have a pathway to come to this country legally, and so that they can fully contribute to our economy and our communities.

It’s time to ask ourselves who we want to be as Long Islanders and as residents of East Hampton. Our daily choices, even acts as basic as conversing with someone different from you and learning about his life, can have a positive impact on our communities.

We need to ask ourselves, are we the type of people who give a drink of water to a thirsty traveler, or who knowingly pour that same water out into the desert?

Isabel Saavedra lives in East Hampton Village and will begin her first year of law school next year at the University of Massachusetts at Dartmouth.