In April, I traveled with an educational delegation from Long Island to the US-Mexico border in Arizona to learn about the harsh realities faced by migrants crossing the desert.

Over the course of the trip, we heard from experts talking about the humanitarian crisis on the border, and how trade pacts like the North American Free Trade Agreement (NAFTA) are forcing people to leave their homes in Mexico and Central America for another life in the states.

One of the major points of focus for the delegation was how the US border strategy has forced migrants to enter the US illegally through a dangerous stretch of the Arizona desert known as the Tucson Corridor. Of the approximately 6,000 confirmed deaths along the border since 1994, roughly half have occurred there.

That amounts to a call to action for Ed Lord, a retiree living in Green Valley, Arizona. 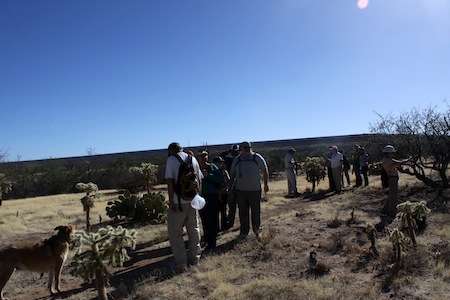 Twice a week, Lord travels with a companion into the desert to leave jugs of water for migrants who are likely in desperate need of a drink. He works closely with groups like Tucson Samaritans.

While it may be hard to believe, their work faces opposition at times, and anti-immigrant groups have been known to pour out water jugs into the desert.

During our time on the border, our Long Island delegation met with Lord, and I’ve compiled some clips of him speaking about the perils that migrants face while crossing into the US: