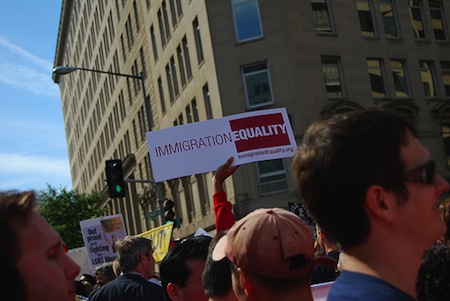 The Department of Homeland Security has halted the deportation of Henry Velandia, a Venezuelan who is married to Josh Vandiver, a US citizen. Vandiver filed a petition for Velandia to receive permanent residence, an option open to heterosexual spouses, but not to LGBT spouses. The petition was not granted because legal marriages between members of the same gender are not recognized under the federal Defense of Marriage Act signed by Bill Clinton in 1996.

U.S. Immigration and Customs Enforcement (ICE) announced that pursuing Velandia’s deportation “is not an enforcement priority at this time,” and closed his case. The decision came pursuant to an internal reexamination of deportations by Homeland Security.

While this was good news for those of us supporting the equal treatment of same-sex spouses, the halting of deportation is hardly equivalent to the granting of permanent residence.

Velandia’s deportation proceedings can be put back on track at any time, and a new president in 2013 may decide that same-sex spouses are a priority for deportation. While he awaits a change in federal law, it will be difficult for him to obtain credit and certain jobs. He will not be allowed to apply for citizenship, and if his partner predeceases him, he may lose any opportunity to obtain permanent legal status in the future, even if the Defense of Marriage Act is repealed.

I hope that Velandia will not have to wait years for Congress to finally act on rescinding this unjust act. He and tens of thousands of other immigrants who are part of same-sex marriages, as well as their citizen spouses, deserve to be treated fairly by American society and should not be forced into a shadow world of illegality, deportation proceedings, and expensive legal defense because of their sexual orientation.