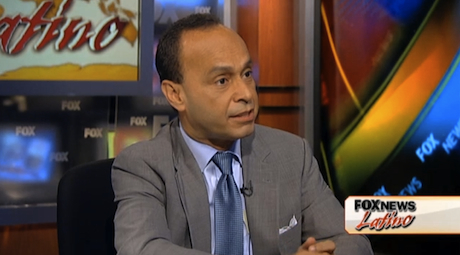 Congressman Luis Gutierrez (D-Ill.), one of the leading political voices for immigrant rights in the country, will consider supporting a Republican version of the DREAM Act, Fox Latino reports. The GOP bill, which Gutierrez called a “watered-down” version of the DREAM Act, would provide legal status to some undocumented youth who attend college and serve in the military, but would not provide a path to citizenship,

Gutierrez said that he could back the bill, which is currently being drafted by Florida Congressman Marco Rubio, “if it stops the deportation, and doesn’t exclude [undocumented immigrants] from becoming citizens.”

Here’s an excerpt of the transcript from the interview with Juan Williams:

WILLIAMS: So you are going to support Rubio’s version of the DREAM Act?

GUTIÉRREZ: Let me just tell you something, Juan.

WILLIAMS: No, answer the question. Did you…? Are you going to support…?

GUTIÉRREZ: I’d like to put it in some context for you. The first person to sit down and speak positively about Rubio from my side of the aisle was me. I remember everybody saying, “Oh, so you are going to get a special office when he is Vice President? Are you going to get a view from the Oval Office now, Luis?” Because that’s the first knee-jerk reaction.

He hasn’t presented all of the details, Juan, to his proposal. He said that he is going to have them ready in a couple of weeks. I look forward. I think he is sincere, I think he is genuine. And if he brings forward a proposal, I am ready to work. I think the real fundamental question isn’t whether or not I am going to support it, because if he has got a proposal, I will work with Rubio, I am telling you that.

WILLIAMS: Even if it’s watered-down and does not grant citizenship?

GUTIÉRREZ: Even if it’s watered-down and does not grant citizenship—if it stops the deportations and doesn’t exclude them from becoming citizens. If it doesn’t stop that from happening, yes. And I think we can arrange, arrive at that. But here is the real problem. I’ll be optimistic. I think he can bring along 10, 15 people. And I think they’ll be 50 Democrats and it can get passed in the Senate. But how do you get it past in the House of Representatives? As I told you earlier, we passed it 216 to 198. Of the eight Republicans among the 216, six of them aren’t there anymore. So how do you get it past Lamar Smith and the Judiciary Committee and a Tea Party-infused Republican Caucus? Even Boehner—the Speaker of the House—said, “Hmmm, it doesn’t seem likely? Really difficult. Don’t know how we can do it.”