New York suspended participation in S-Comm two months ago, and the Obama administration responded by telling states that it would continue the program without state consent. A national coalition of immigrant organizations asks you to call the White House and insist that this program be stopped.

Here is an email petition directed to President Obama, and a guiding script for the phone call: 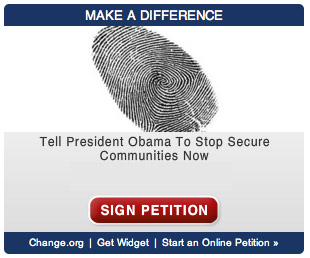 Now it’s time we send a clear message to the White House about the misnamed “Secure Communities” program:

DHS is using S-Comm as a vehicle to meet the agency’s deportation goal of 400,000 people per year, subjecting people to detention and deportation regardless of whether or not they committed any “crime,” the degree of severity of legal infractions, how long ago any charges occurred, what kind of rehabilitation has taken place, or what ties they have to communities.

S-Comm compromises our communities’ safety by driving a wedge between local police and the communities they are supposed to serve, adding to the already tenuous relationship.

Join your neighbors, co-workers, and community members and Call the White House today!

I am calling to urge the president to heed the call by communities, advocates, faith leaders, and elected officials across the country to suspend the “Secure Communities” program and stop the widespread deportation of our community members.

Until there is a reasonable solution with a real path to legalization that includes all generations of immigrant community members to adjust their status, we urge you to suspend S-Comm and keep our families together.

We are deeply disturbed by the recent DHS announcement to rescind all MOA’s with the states under the president’s directive, only to continue with unabated and absolute disregard for widespread opposition to S-Comm.

In the spirit of democracy, I urge the president to suspend the Secure Communities program, stop the deportations, and investigate the widely reported abuses that have been caused by policies fueling increased repression and racial profiling of immigrant communities.