On Sunday, April 29, over 100 members from Make the Road New York and allies took Suffolk County by storm to demand that Long Island’s senators support state legislation to increase the minimum wage. In the heart of Brentwood, the site of Make the Road’s new office, members joined for a press conference, marched around the downtown area, and got local residents to sign petitions of support.

At a press conference, low-wage workers from Make the Road were joined by Assemblyman Phil Ramos and representatives from the small business and faith communities. Following the spirited accounts of low-wage workers—focusing on the need for higher wages—the crowd sprung to action and marched around downtown Brentwood, banging drums and chanting all the way. 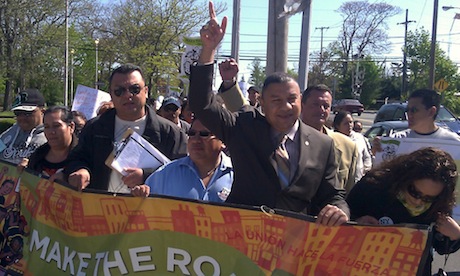 The day’s message was clear: the State Senate must pass the bill, as $7.25 an hour is insufficient to live on, especially on Long Island, where the cost of living is particularly high. The event sought to press the two state senators whose districts include Brentwood—Lee Zeldin and Owen Johnson—and educate their constituents about this critical issue.

Here are some quotes from those at the march:

On Long Island, families aren’t able to live on $7.25. The republicans say that raising the minimum wage will hurt small businesses but they are wrong. The best way to stimulate the economy is to put money in the hands of working people who will spend money buying and supporting small businesses in our area.

I’m joining the workers in the fight for better wages. I always pay my employees more than minimum wage. As a business owner, every day I get up early and work to support the economy, and I need people on Long Island to have fair wages so that they can buy things in my restaurant.

I’m a single mother and I have two children to support. With this salary, I’m barely able to pay my $800 rent and all the expenses for my family. I thank God that I have this job, but I also understand that our rights should be respected. If the minimum wage goes up, hardworking people like me will be able to live with dignity in New York. I’m not asking that the government take care of me, I want to work for a better life, but $7.25 isn’t enough, especially on Long Island, where the rent, the utilities, and the food is so expensive. And this is one of the most expensive places to live in the United States.

As a single mother with three children, my salary scarcely pays a $1,300-per-month rent and to support my children with basic necessities like food, school supplies, visits to the doctor, etc. Although I work full-time, many times I have to ask my boss for double shifts, and at times have to do side jobs to pay my rent and put food on the table for my children.