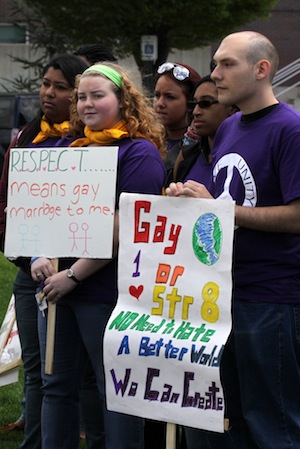 Attorney General Eric Holder took an action today regarding the deportation case of a New Jersey man that may have important consequences for same-sex couples.

Paul Wilson faces deportation. He is a partner in a civil union under New Jersey law. Were he a spouse in a heterosexual marriage, his deportation would be eligible for cancellation.

The Attorney General has vacated an order from the highest immigration court, the Board of Immigration Appeals, and asked the board to reconsider whether a civil-union partner is equivalent to being a spouse for the purpose of canceling removal.

Here is the order of the Attorney General to the Board of Immigration Appeals:

I direct that the order of the Board be vacated and that this matter be remanded to the Board to make such findings as may be necessary to determine whether and how the constitutionality of DOMA is presented in this case, including, but not limited to: 1) whether respondent’s same-sex partnership or civil union qualifies him to be considered a “spouse” under New Jersey law; 2) whether, absent the requirements of DOMA, respondent’s same-sex partnership or civil union would qualify him to be considered a “spouse” under the Immigration and Nationality Act; 3) what, if any, impact the timing of respondent’s civil union should have on his request for that discretionary relief; and 4) whether, if he had a “qualifying relative,” the respondent would be able to satisfy the exceptional and unusual hardship requirement for cancellation of removal.

Thanks to Prof. Lauris Wren for sending me this decision.