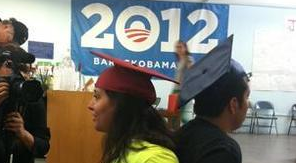 I sat up and realized it was only a dream. But was it really?

A few nights ago, I dreamt that I was driving my partner Jose to school. It was raining and the road was slippery. I was flustered because I did not know where I was going and it felt like I was on some highway in Los Angeles, with many exits, lanes and cars.

Jose, who’s studying to be an economist, had asked me to drive because he was studying for a test. At times, he would get distracted by my driving and look up. But just as I was approaching a fork in the road, he had gone back to reading his books. I asked him to help me decide which way to go but it was too late, I was going down State Road 90, and I needed to stay on Road 27. I don’t know what those numbers mean, but I can clearly remember seeing the signs. I jumped out of the car and started arguing because Jose wasn’t being as helpful as I wanted him to be.

The next thing I know, the car is going down a hill and spinning uncontrollably. The car crashed into a house, and it had embedded itself into the walls and landed in the living room. As we ran towards it, big muscular men came out of the house, with the kind of posture and attitude that seemed as if they were getting ready to fight us. They were clearly upset. I asked if everyone was okay and thankfully they were.

As my family arrived at the scene of the accident, all I could think of was, “What I am going to do when the cops come?” Like many undocumented immigrants, I don’t have a driver’s license.

I started to cry because I knew that the blame would fall on Jose. I wanted to take responsibility for the car accident but without a license I knew that instead of being given a citation, my fate would be jail.

I woke up from the dream breathing heavily and with pain in my chest.

This, although just a dream, is the reality and fear that many Dreamers like me live with every day. 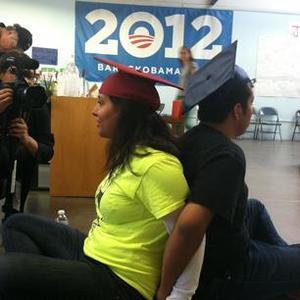 Two DREAM Act students stage a sit-in to get President Obama ‘s attention to do something about stopping deportations of Dream students.

When I was in high school, I took drivers education in 10th grade. I was chosen to be one of the people that took the cars out from the metal fence cage they were parked in. I was considered a good driver. Now, 27 years of age, I am 12 years older than the legal driving age, and I have to depend on other people to drive me around. I have to depend on the inadequate transportation system in Miami to take me places.

What temporary administrative relief from President Obama means to me is the ability to wake up from the nightmare I live in. It means being able to be a full, complete human being doing what 27-year-old people do: go to school, drive to the store to buy groceries, visit my parents, and drive Jose to school as he reviews for a test without fear.

I want to feel complete. And being complete in this country means being able to do what many take for granted, moving freely and being part of society in an all-inclusive way.

Gaby Pacheco, editor of Latina Lista’s “American Dream” section, is an undocumented American and an immigrant rights leader from Miami, Florida. Since 2004 she has been working on the DREAM Act. Her passion for education and immigrant rights prompted her and three friends in 2010 to walked 1,500 miles form Miami to Washington, DC, to bring to light the plight of immigrants in this country, this walk was dubbed the Trail of Dreams.