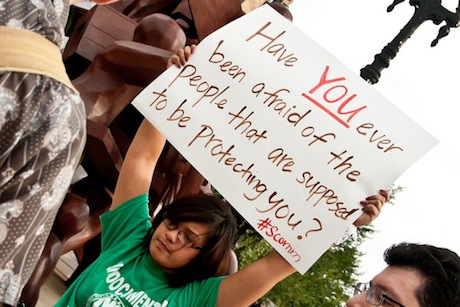 The massive expansion of immigration enforcement programs like Secure Communities has led to the wrongful detention of US citizens. While statistics are hard to come by, a study of two detention facilities in Arizona found that 82 US citizens were detained in just two years, one being held for a year.

Because immigration enforcement relies on the notoriously inaccurate immigration database, some naturalized citizens do not have their citizenship information properly entered into their records. Even worse, many citizens have outdated or incorrectly entered information in the database seemingly making them targets for arrest.

Even native-born citizens have been detained, like Antonio Montejano, who was born in Los Angeles. He was recently held for four days on an immigration detainer even though he is not an immigrant. The detention was the result of incorrect information in a U.S. Customs and Immigration Enforcement database and was triggered by a Secure Communities check following a brief detention by the local police.