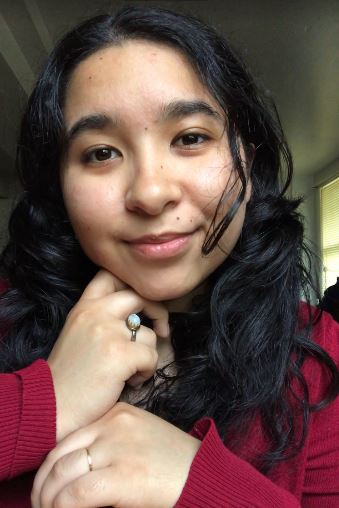 How long does hope last? What can the Dreamers of our times believe when the laws change at every moment? Can they continue dreaming? Our writer, despite everything, fights for a dignified life in the country that saw her grow but treats her with indifference. The uncertainty, frustration, sadness, all these feelings have been reflected in this moving, but a necessary story that our dreamers live every day in all parts of the nation that drowns them in white noise.

The television sits inside the tv stand. A mahogany color surrounding it in its niche. It’s protruding belly-like curves reach beyond the space in which the screen displays flickering images. They are pictures that breeze by the minds that await the next set of pictures that tell another story. The news cycle is a routine, but today I stand in front of it waiting to hear the rest of the words that were teased during a commercial break.

The news reporter begins to speak about the executive order to terminate DACA, confirming the worst. Her words pull my stomach down, creating a sadness so deep it paralyzes me, it drowns me and its fist clutches my throat. My grief drags me farther from the television, and I feel as if there is an immeasurable amount of distance between my body, the tv stand, and the rest of the room.

I’m watching him sit at his desk. His usual grumpy face turns into a violent smile as he holds up the piece of paper that vows to destroy my life.

I am once again reminded of who I am and who I cannot be. And I’ve felt this before, I’ve felt it sitting on the reading carpet in fourth grade next to my white friend. I remember that was the first time I noticed it, the first time I recognized white American privilege in another person. I looked at my knees, then at hers. I thought that white skin didn’t carry the problems that my brown skin did. Looking back, I regret thinking it but I couldn’t deny that having darker skin didn’t feel different, or didn’t mean something different. I would look at her and know she had “papers.” My mom would always talk about these “papeles,” meaning legal immigration papers. There were those who had them and those who didn’t. At school I felt like everyone else had them, but at home everyone I knew wanted them.

At such a young age I learned about the power of words on a piece of paper, the life changing effect of the stroke of a pen. Despite our political reality, my mother taught me to have hope. She believed we would one day be granted citizenship, and she still does. Even after years of seeing family members come and go through the process of deportation and detention. She told me I could still do something, I could still dream about my future and work for a better life. In 2012, we celebrated the fruit of our cultivated hope when Barack Obama signed the Dream Act.

I remember the first time I met with a lawyer at CARECEN, a nonprofit organization that holds events and connects immigrants to lawyers to file their immigration paperwork. I was 15, the minimum age to apply. The office looked beat down. The corners of the carpet were lifting, the stairs an aged yellow rather than a sleek white, and my lawyer’s office was so small I wondered how they fit the desk inside. As I sat in the small waiting area, unsticking my thighs from the blue plastic chair, I was reminded of what I was, what I was labeled as, and what my mom and I were waiting to change. I remember thinking it would be easy. I thought I would walk in, sign my name, hand in any required documentation, and then exchange farewells. In reality, we were there for a couple of hours, going through packets of information and questions. I was asked if I was a convicted felon, if I had ever made chemical weapons, or if I was conspiring with terrorists. I was made aware that drinking underage could endanger any granted immigration protections and employment authorization. And I remember my shock. I remember laughing. I remember brushing it all off, thinking I’d never have to worry about any of it. I had completely underestimated the amount of anxiety it would cause me in the future. The swirling fear, worry, and turbulence of it all, surrounding me like background music. The anger in my core, the frustration, and the only relief to this being that red card I carried in my purse. The one that allowed me to have hope. The one that expired every 2 years. The one that took months and hundreds of dollars to renew.

Regardless of it all, I continued to study, I continued to work, and I continued to build the future I wanted, the one my parents sacrificed so much for me to have. I learned to have hope, only to have it crushed years later, standing in my own living room.