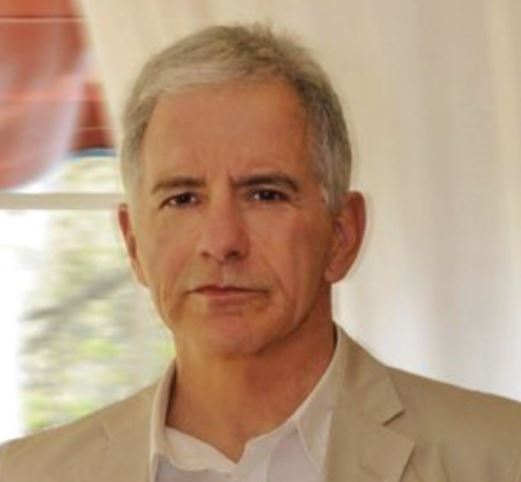 On a glistening Spring morning, Ambrosio stands at a distance from me across a stretch of white gravel that is reflecting clean sunlight. Against the breezy sway of bushes and trees, his stiff posture seems tense and unnatural, as if he had been detained and told to stand there alone and not move.

He has zipped his dark jacket all the way to his chin and looks like a stick figure propped up stark in the brilliance of the day. We are talking. As we do, he reflexively begins to move closer to me, as any two people in conversation might. But I raise my hand, palm toward him, asking him wordlessly to stay back.

It is puzzling and strange for both of us, as if we think we are being watched by something remote and large that we do not want to provoke, something we do not want to come our way. And I am confused by something else. I am used to thinking of him, for all of his 60 years, as someone as calm, sturdy and confident. But as we look directly at one another today for the few things we have to say to each other, I see that his eyes are red and watery and I wonder what I am seeing in them. Is it an emotion or a question? Or maybe an apology or fear?

I can’t read what I’m seeing. I’m not sure what is happening for him.

Over the years—17 of them, I think—he and I have walked together often, once or twice a week sometimes, discussing what work was needed, what projects to advance and when. Now, almost one month into Spring, strangely I hadn’t seen him or heard from him. Then, two days ago he called. Yes, he had been sick—for two or three weeks now.

Did I know a doctor he could see? He’d been to Red Cross and had been tested. No, he hadn’t gotten the results.

In those two or three weeks Ambrosio has been sick and I have been safe at home and healthy, I stopped keeping track of time and stopped listening obsessively round the clock to discussions about how big, how many, whose fault, and how long…? Because that also meant looking into the eyes of the world and seeing there, every day, the mix of emotion, questions, apologies, and fear and not being sure how to read them. Looking directly at them gave me no answers.

When we were on the phone, Ambrosio and I spoke in Spanish, as usual. Listening to him, I strained to make sure to get it all straight. The one word I was sure of because he said it several times was “calentura.”

“Tengo calentura todas las noches. En tres semanas, no ha pasado.” He has been running a fever for three weeks and it hasn’t gone away.

In the house where he lives with three other men, he says everyone else is fine. I have no idea when we will walk and talk again the way we have for years. Even before the outbreak, after the normal season, he came up with a project he could do because money was short.

The reason he had called, he said, was to ask about a doctor. I told him I would find out about the clinic my daughter-in-law has used. But what I wanted to be sure to tell him on this call was that he should still come by every week.

“Ambrosio. Voy a pagarle cada semana como si estuviera trabajando todavía. Lo dejaré en el asiento trasero del carro blanco. Ambrosio, I will pay you each week as if you’re still working. I will leave it in the back seat of the white car.”

And so, this was the first week of how many that we would keep our distance?