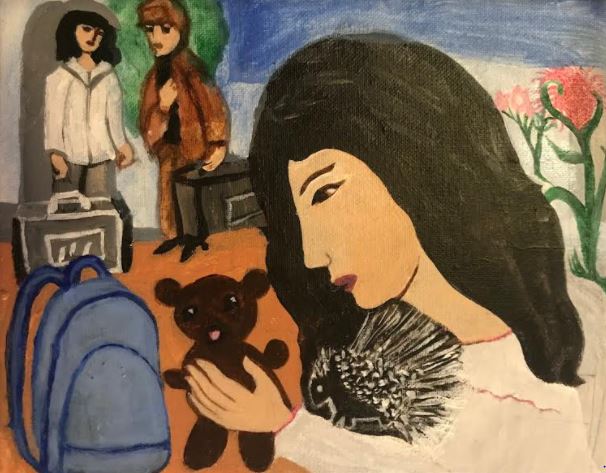 We share this story from a college admissions counselor, whose work with immigrant and refugee students brings back her own memories from another war-torn and dangerous time,  as an offering for peace and compassion for all newcomer students. The author has asked to keep her story anonymous. When we share stories anonymously, we provide a painting made specially for each story by Herstory artist Gwynne Duncan, out of the images that each author gives.

“He says that since your birthday is so late in the year and you’re joining a couple of months into the year, you can choose whether to start first grade or second grade,” my aunt translates the principal’s foreign words.

I lift my eyes from my folded hands in my lap and look to my aunt on my right and then my parents on my left, hoping one of the three of them will answer the question for me. Not two months ago, I was starting first grade with a traditional outdoor German ceremony and 10 or 11 other students. We were so excited to have graduated kindergarten and to start first grade together, eager to learn. Now I’m sitting in a room in a large building that looks nothing like my old school.

I am so upset with my family for suddenly forcing me to leave our home and my school, friends and family—and delicious food—and putting me in this situation. We had to pack up all our things and I was allowed to choose only two small stuffed animals to bring with me in my little backpack. I was devastated and didn’t know what they were thinking.

I uncertainly tell my aunt that I’ll start in second grade. I don’t know why, but why not? I wonder if my brother’s going to have to do the same thing in his school.

A few days later, my cousin is walking me to our school. We were limited in what we could say to each other: he doesn’t speak German and I don’t speak English, but we both speak some Serbian.

I walk into the school and he takes me to the office I need to go to and leaves me there to go to his classroom. The principal I met the other day introduces me to the teacher who will be teaching me English. She tells me in German that she and I will be meeting outside of my regular classroom a few times a day, but that I need to go into the classroom with the other students for now. She walks with me and introduces me to them. Some of them nod, others say hi, and others say words I don’t understand. I sit down where I’m instructed and wait until I meet her again. I don’t know what to do, but everyone seems nice enough.

It’s now lunch time and I have no idea what I need to do since I didn’t bring any food with me. Thankfully, one of the women who works in the cafeteria speaks German, so she walks me through it. I’m so nervous and can’t wait until the day ends and I can go back “home” to my aunt’s house. I wonder how much longer I need to be here for. None of the kids talk to me and I see some of the look at me and laugh. So much for being nice enough, I guess.

I had my first meeting with the English teacher, which was a relief. She’s very nice and it’s so good to be able to speak with someone who understands me and who I understand.

When I go home later on in the day, I hug my mom and start crying hysterically. I demand to know why we’re here. My mom tells me that she’ll tell me when I get older.

A few years later when we are working to get our US citizenship, my parents and brother decided now was the time to explain to me what happened.

When I was only two years old, the country I was born in was in a civil war fueled by religion and my mom, brother and I were on the last plane out of the country. We went to Israel to live with some close family friends, while my dad went to Germany. I remember very vividly being separated from him and being upset, confused and holding on to him as long as possible; as much as any two-year-old can, anyway.

A few months into being in Israel, where most of my first memories were formed, we moved to Germany to be with my dad. He wasn’t able to join us in Israel, so he found refuge with his brother in yet another foreign country. I was so happy to see him when we were lucky to find each other at the airport.

We were in Germany legally as refugees from a war-torn country, but becoming a citizen there is very difficult. This is why my parents uprooted us again, but this time to the United States. At this point and age, I understand and appreciate the decisions they made, but it doesn’t make experiences and emotions I experienced any less traumatic.