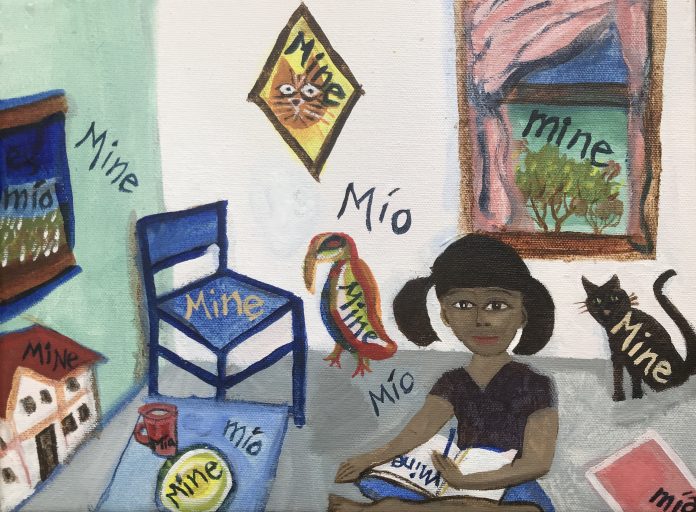 This week we present a story by a student at LIU Post who should have the whole world ahead of her as she prepares for a career in writing, as more and more students rise up to keep their families together and to keep what they have come to cherish. We join her in her resistance that grows ever stronger with every new attempt by the people in power to erase all that she holds dear.

At 5 years old, the world was mine. My friends were mine, my parents were mine, and I wrote my name all over them saying, “mine, mine, mine.” Now, older and on the brink of legality, things don’t seem so easy… they’re so personal. At 20 years old, I await my 21st birthday just to do one thing: help my dad acquire a green card—technically, the 5-year-old in me would just say so, so I can keep seeing my papi every Saturday for breakfast.

My dad arrived in the United States in 1995 as a 20 year old. He wore those horrible baggy pants and had a creepy thin-lined mustache. He made mixtapes and kept his cassette tapes in a treasured box, even after buying a Walkman. He did not have much to call his own. He arrived with nothing but $30 sewed to the inside of his favorite jeans. How different life was for him at 20 years.

When I start to think of my 21st birthday, I naturally drift off and think of the many things that I will be able to do as a legal adult. But, the most important one would be being able to get my father to stay in the United States.

My dad was given TPS after a horrible earthquake hit El Salvador. Earlier this year, the Trump administration announced that TPS holders from many impoverished countries, such as El Salvador, would no longer have TPS. However, my dad looked at me with hope. He looked at me and said, “You turn 21 this year, m’ija.”

Yeah, I turn 21 this year. A typical 21-year-old would be taking shots in a horrible club with a tiara on her head. But me, I’ll be fighting for what matters. I’ll be fighting for my family, for my father, so all his years, experience and money he’s put into this country will not go wasted, so that his sacrifices will not be in vain.

My papi and I have had many rough patches, fights, conversations, loving moments… I’d like to keep having all of those moments with him—here, where he belongs. Every time the Trump administration tries to erase “mine” from the things that belong to me, I’ll rewrite it stronger and with more resistance.