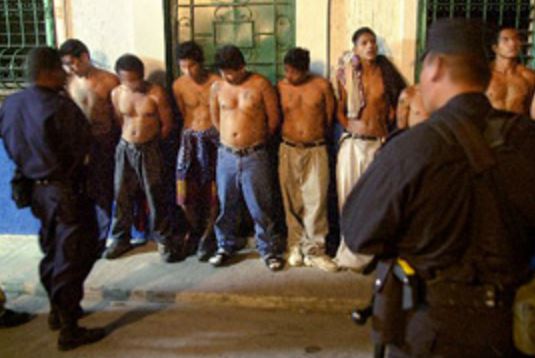 A new study from the Immigration and Refugee Board of Canada (IRBC)looks at the impact of gang violence on refugees forced to flee El Salvador. The violence has left to nearly 8,000 child refugees arriving on Long Island over the last four years. I will post some of the findings from this and a companion IRBC on the impact of gangs on women in Central America.

The IRBC is a Canadian governmental agency. It has been studying the problem of gang violence in Central America since 2013. Gang violence began after the Salvadoran civil war ended two decades ago. According to the report:

In the 1990s, the US undertook large scale deportations of non-US citizens of Central American origin back to their countries of origin, after serving time in jail. Many of these deportees had fled from El Salvador during the civil war and went to the US but later became members of US-based gangs, the Mara Salvatrucha (MS-13) and the Barrio 18 (M-18). These gangs originated in Los Angeles, California, and spread to Central America via these deportations.  Sources explained that at the time when these deportations occurred in the early 1990s, the country’s institutions were weak as the state was in the process of undertaking the reforms followed the 1992 peace accords that ended the civil war. Sources indicate that in this historical context, the gang phenomenon in El Salvador grew, mutated, and became more powerful. The Vice-Minister of Justice and Public Security noted that the origins of the gang problem are rooted in the erosion of the social fabric and the weak presence of the state following the war. Other sources pointed to poverty as the breeding ground for gangs to prosper.
In 2003, the Salvadoran government instituted mano dura (heavy handed) and super mano dura (super heavy handed) policies to deal with the rising violence committed by gangs by adopting measures that included immediate imprisonment for certain appearances and behaviours, such as having a tattoo, apparel and mode of dressing, hair cut style, and being in groups. As a result, many people accused of being gang members were detained, causing the prison population to rise to 8,000 prisoners in 2008, which was double the 2004 figure. A study on the security situation in El Salvador between 2009 and 2014 undertaken by the Public Opinion University Institute (Instituto Universitario de Opinión Pública, IUDOP) at the José Simeón Cañas Central American University and provided by its Director during the meeting with the Research Directorate indicates that, according to statistics provided by the General Directorate of Penitentiaries (Dirección General de Centros Penales, DGCP), in 2003 there were 11,451 inmates in Salvadoran penitentiaries, 12,525 in 2005, 17,677 in 2007, 21,032 in 2009, 25,471 in 2011, and 26,848 in 2013. Sources indicate that the gang problem, instead of improving, became worse, as gangs became more organized from within the prisons. Presently, the government has not developed prevention programs with regards to the gang recruitment. The main gangs currently operating in El Salvador are the Mara Salvatrucha and the Barrio 18. However, as journalist Carlos Martínez from El Faro indicated, in 2005, after a long process of internal purges and conflicts, the Barrio 18 splintered into two rival factions: Barrio 18 Revolucionarios and Barrio 18 Sureños.
During the mission, several sources described the level of crime in El Salvador as “critical.” The Director of the IUDOP indicated that weapons are widely available in El Salvador, and that, based on their assessment, 80 percent of crimes are committed with firearms. A report on homicides in 2015 produced by the Legal Medicine Institute (Instituto de Medicina Legal, IML) similarly indicates that 83.2 percent of homicides committed during that year involved a firearm. Gangs are obtaining sophisticated high-caliber weapons to commit crimes. According to IUDOP, civilians are also increasingly arming themselves given the security environment. El Salvador’s homicide rate for 2015 was 103 homicides per 100,000 inhabitants, while for 2014 it was 64.2.