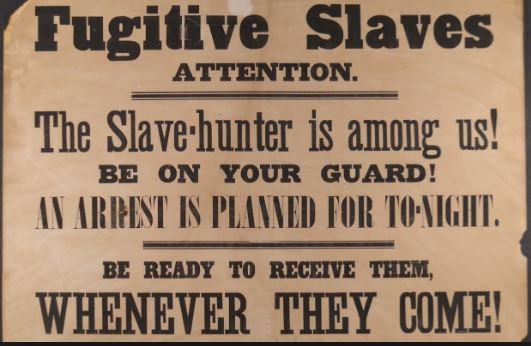 Kate Masur, associate professor of history at Northwestern University, is one of our country’s leading historians of the Civil War and Reconstruction Eras. She has a great essay in today’s Chicago Tribune looking at the link between local governments resisting ICE raids this week and the resistance of the North to the Fugitive Slave Act before the Civil War. Here is the substance of the article:

Amid the Trump administration’s threats to deport thousands of immigrant families, state and local governments and community organizations across the country are voicing support for immigrants and refusing to cooperate with federal law. Mayor Lori Lightfoot has declared that Chicago police “will not cooperate with or facilitate any ICE enforcement actions.” The Illinois legislature, supported by Gov. J.B. Pritzker, banned private immigrant detention centers and barred local law enforcement from cooperating with U.S. Immigration and Customs Enforcement.

Their actions echo responses to the Fugitive Slave Act of 1850 and remind us that the structure of government in the United States allows space for resistance to unjust federal policies. In the weeks after Congress passed the law on Sept. 18, 1850, Chicagoans took measures to ensure that it would not be enforced in the city. More than 300 African Americans and white allies gathered in Quinn Chapel, the city’s African Methodist Episcopal (AME) church, to discuss how to protect each other and what next steps to take. Black Chicagoans organized a police force to patrol the streets, looking for would-be slave catchers.

In mid-October that year, a slave catcher from Missouri came to town with an enslaved man as his assistant, distributing handbills that described three people who had escaped from slavery. Several “respectable citizens” of Chicago informed the slave catcher that he was putting his personal safety in danger; he heard he would be tarred and feathered. Meanwhile, his slave boarded a steamer bound for Canada. The slave catcher applied to a Chicago judge for protection, but the judge said there was nothing he could do. Frustrated, the Missouri man left the city.

The next day, the three people he’d been looking for came out of hiding and boarded a boat bound for points east. As a sympathetic news reporter concluded, “Our colored population are fully prepared for any emergency. While they do not propose to commit any violence unless driven to the wall, they will not suffer the new law to be executed upon their persons. In resisting this even to death, they will be sustained by the omnipotent sentiment of the city of Chicago.”

Days later, the Chicago City Council passed a resolution declaring that the law was unconstitutional and that the city and its officers would not enforce it. The law was “cruel and unjust,” the council said, and “ought not to be respected by an intelligent community.”

The federal Fugitive Slave Law was designed to empower the U.S. government to capture runaway slaves who escaped into free states. Pro-slavery politicians in Congress demanded the law in large part because Northern state governments and local officials were increasingly refusing to help slaveholders and their agents get their slaves back.

Slaveholders in Congress often argued against expanding and empowering the federal government. In this case, however, they wanted the U.S. government to ignore the expressed wishes of the people of many free states; their law empowered federal officials to enforce the repressive statute and demanded cooperation from local officials and private citizens.

Resistance in Chicago was dramatic, but it was not unique. Across the North, Americans resisted the new law. Among the most famous examples occurred in Boston, where in 1854 abolitionists struggled to protect Anthony Burns, who had escaped from slavery in Virginia.

President Franklin Pierce, intent on enforcing the law, authorized federal officials in Boston to “incur any expense deemed necessary” to send Burns back to slavery. The U.S. attorney and his allies mobilized tremendous force, including state militia, U.S. soldiers and Marines, to overpower Bostonians’ resistance and force Burns back to slavery. It was a pivotal moment for many Northerners who hadn’t previously been involved in the anti-slavery movement but now saw the cruelty and excess of the law and resolved that there must be another way.

Boston’s black abolitionists did not forget Burns. They raised money to purchase his freedom, and Burns went on to study theology at Oberlin College and become a Baptist pastor. His life was cut short by tuberculosis. When he died in Canada in 1862, he was just 28 years old.

To be sure, the decision to resist was not to be taken lightly. In Boston, resistance to Burns’ rendition led to the death of an assistant to the U.S. marshal. Powerful, well-respected Americans stood up for the Fugitive Slave Act. Stephen Douglas, the nationally prominent Illinois senator, rejected the council’s resolutions. Chicagoans must not nullify federal law, he told a great crowd. “We have no right to interpose our individual opinions and scruples as excuses for violating the supreme law of the land.”

Almost 170 years later, the Fugitive Slave Act is viewed as one of the most repressive federal laws in all of American history. It’s clear to us that people who managed to escape from slavery were asserting a fundamental human right — the right to personal freedom. It’s also clear that resistance was effective. It drew popular attention to the law’s brutality, helped shape popular opinion, and made enforcement more costly for the government, both financially and reputationally.

Those who today rally on the side of immigrants and who look for ways to resist policies they deem cruel and inhumane are acting in a long American tradition. We can take inspiration from the bravery of people in the past, who dared to stand up for human rights in face of a government that had taken a wrong turn and lost sight of its highest ideals.

Kate Masur is an associate professor of history at Northwestern University.