Immigration advocates statewide, but especially on Long Island, are expressing deep concerns about a NYS bill aimed to prohibit law enforcement agencies to limit collaboration with Immigration Custom Enforcement (ICE), a federal agency, regarding the detention of undocumented immigrants.

The bill, they said, will jeopardize important improvements in the relationship between immigrant communities and the police, and will make immigrants fearful to report crimes.

“We have been very concerned when we knew about this legislation and the anti-immigrant speech used to promote this bill,” said Walter Barrientos, an organizer for Make the Road New York, in an interview with Long Island Wins. “There are a lot of studies that say that this is a bad practice, first because police should enforce state laws, not immigration laws, and second because we know that community members are afraid to have contact with police,” he said.

Under a former federal policy called Secure Communities, local law enforcement agencies were detaining undocumented immigrants, even without a warrant, and holding them beyond normal detention time. This has repeatedly caused unjust deportations, and worse, it has caused separation of immigrant families. It has also made immigrant families cautious of police because of their relationship with ICE.

Community members said during a protest last Friday in Brentwood, that they are afraid because the bill could cause an increase in separation of families.

“We want police to protect us and we do not want separation of families. With this bill, many families are going to be afraid of the police,” said Yadira Vasquez, 32, a resident from Hampton Bays and member of SEPA Mujer, during the protest. 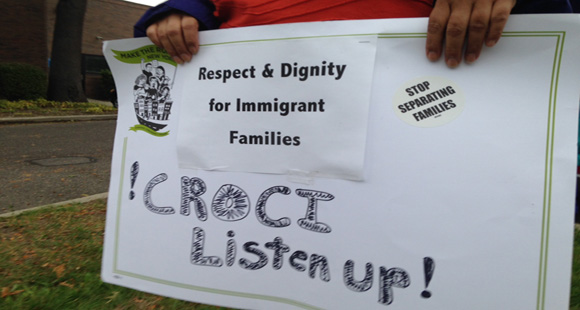 The legislation contradicts recent policies adopted just a year ago in both, Suffolk County and Nassau County, concerning the detention of undocumented immigrants. The head of the Sheriff’s department in each county decided to stop ICE’s request in the detention of undocumented immigrants for more time that they were supposed to, unless a warrant is presented. The decision was made after Federal Courts in other States concluded that local law enforcement did not have the obligation to comply with that request.

Barrientos said the bill is misinformed and it is destroying long time efforts to improve relationships between immigrants and law enforcement and to stop collaboration between police and ICE.

“It worries us a lot because we believe the Senator represents an area on Long Island that is home for a big Latino population,” Barrientos said. “This legislation will throw to the garbage five years of hard work that our organizations have been doing to make the state and county policies work for the immigrant communities and to stop the deportation system that has been separating families.”