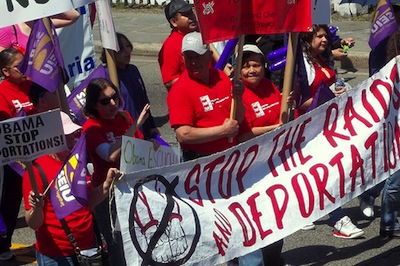 Following in the footsteps of states like Illinois and California, Governor Andrew Cuomo has suspended New York State’s participation in the Secure Communities immigration enforcement program.

The program, which allows data sharing between local police and federal immigration authorities, was purportedly designed net serious criminals. But from January 1 to March 31, more than 80 percent of the people deported through the program in New York State had never been convicted of any crime.

The program was rolled out in 35 New York communities, including Suffolk County, beginning last year. With the governor’s announcement, even communities that chose to share their fingerprint data will be barred from doing so. Secure Communities has not been put into effect in New York City.

In an emailed statement, Cuomo pointed to “mounting evidence” that the program wasn’t meeting its goals.

“There are concerns about the implementation of the program as well as its impact on families, immigrant communities and law enforcement in New York,” he said. “As a result, New York is suspending its participation in the program.”

The suspension is a momentary victory for immigrant rights supporters, who for months have been pressuring Cuomo to drop out of the program.