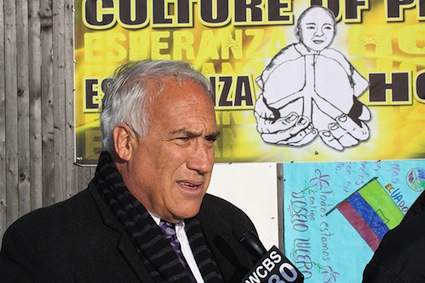 As you may know, there will be a free performance of the play “What Killed Marcelo Lucero?” in Patchogue tonight, the first time that the work has been performed in the village where Marcelo Lucero was attacked and killed in November 2008.

The performance of the play is a project of our Welcoming Long Island campaign, and with that in mind, I contacted several local leaders at the end of last week and formally invited them to attend.

One of those leaders was Patchogue Mayor Paul Pontieri. The mayor was kind enough to reply to the invitation, and agreed to have his statement published on Long Island Wins.

You may already be aware of this, but there will be a screening of the play “What Killed Marcelo Lucero?” in Patchogue on Tuesday, April 26, at St. Joseph’s College.

On behalf of Long Island Wins, I would like to formally invite you to attend the show. I know this is short notice, but we believe that this will be a particularly important performance, since it will be the first in Patchogue, the village where Marcelo Lucero was attacked and killed.

We sincerely hope that you will be able to attend.

And the reply from Mayor Pontieri:

It is for the reasons you state why I should be there, that I won’t. You are right it did happen here; we have lived through the tragedy, it was a tragedy that came to us by seven young men from outside the Village, I have seen the play, I don’t need to see it again. I don’t need to answer more questions about it. In this community we live and breathe it every day. As you know the Village is being sued by the Lucero family and given that fact alone the Village Attorney doesn’t believe it would be appropriate that I attend.