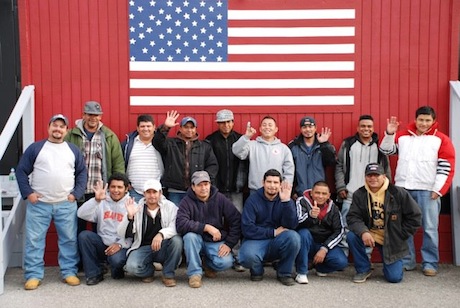 While the Freeport Trailer began as a gathering spot for immigrant workers in the area, it has grown into a small community center, and an upcoming lecture on the causes of migration brings that new role into focus.

On November 2, one-time undocumented immigrant Jaqueline García will visit the trailer to speak about her experience living in the shadows in California, and later working with migrants in Mexico. The event is hosted by the organization Witness for Peace and The Men of the Freeport Trailer, some of whom will also share stories about migration. It is free and open to the public.

Here are the details; scroll down for a bio of Jaqueline García:

Please join us for a community gathering at the Freeport Trailer

Come hear ﬁrst hand accounts of migration stories, the root causes of migration and the devastating effects on families and communities. A shared meal and conversation immediately following the
discussion!

The trailer is located at the Eastern End of Bennington Ave in Freeport. Heading east on Sunrise Highway make left on Liberty Avenue (Baron Auto on the corner). At end, make a right onto Bennington. Trailer is straight ahead. 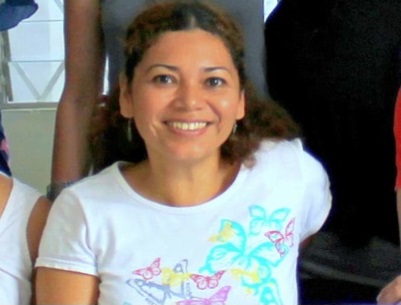 A former undocumented immigrant to the United States, Jaqueline García Salamanca is an advocate and organizer working in Veracruz, Mexico with the Jesuit Migrant Service.

She has worked tirelessly in migrant sending communities while also providing humanitarian support for migrants who are taking the dangerous journey northward.

Most recently, she led 120 local volunteers through an intensive training program on how to create strong migrant support committees along a significant stretch of “la Bestia,” the deadly train that many thousands of Central American migrants ride northward each year in search of jobs and better lives for their families.

Because Veracruz has become an important sending region for migrants, Jaqueline’s work has also been to help strengthen those communities left behind by organizing empowerment and support programs for women and families of migrants.

“Migration has always been present in my life: my father left town when I was four years old and never returned. My mother left me and my brother with my grandparents to search for him, but never heard from him again.”

At the age of 16, she joined her mother and brother in migrating to California as an undocumented immigrant, where she worked a number of low-wage jobs and became interested in service. She returned to Mexico and worked for several years as a catholic missionary in some of the country’s poorest areas.

After studying social psychology and later a Master’s Degree in social sciences, she joined the Jesuit Migrant Service and began to see migration in a new light.

“I read books, studies, and articles about migration and ended up reading my own story: I am the daughter of migrants and bear the marks and emotional costs that are left by my father’s absence. I am a witness to the unfinished story my mother began to live as the wife of a migrant.”

Her work has allowed her to “gain the tools to reconstruct myself as a girl, as a young woman, and as a woman, to understand the loneliness my mother lived through. In community work I have been able to revalue and accept the challenges that migration has placed on my path.”