The New York DREAM Act is finally getting serious consideration in Albany and it looks like Long Island may play a strategic role in the statewide effort to pass it.

New York already has what some states refer to as their DREAM Act: in-state tuition rates for undocumented students at state universities and colleges. Otherwise, undocumented students—even those have have lived in New York for most of their lives—would have to pay out-of-state or international student fees.

The New York DREAM Act that you’re hearing about now is a little different. The bill would remove discriminatory boundaries on state aid, boundaries that exclude promising high school graduates just because their parents brought them here without papers when they were kids.

Who will be affected if this bill passes? Under the legislation, undocumented high school grads who came to the US by the age of 18 and who have lived in New York State for at least the last two years will be eligible for state aid for higher education. Violent felons are excluded from benefiting from the law.

It is estimated that passage of the bill will cost New York State one million dollars or less. The cost may be relatively small, but passage will send a big message. The preamble to the bill itself (which you can read here) says as much: “It is now up to the State of NY to provide dignity and recognition for these promising and deserving young people.”

As a state with one of the largest immigrant populations, NY should be at the forefront of progressive immigration policies, pushing back on the tide of national and local anti-immigrant policies. The NY Dream Act will respect the dignity and contributions of undocumented youth in the state by giving them access to state financial aid programs. 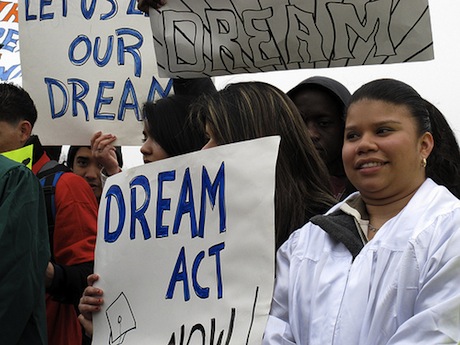 The nine Republican state senators from Long Island could play a decisive role in the passage of the bill if it comes to a close vote in that house.

Next week, I’ll let you know what you can do to help the Dreamers pass this important legislation.

To hear Dreamers on Long Island talk about the struggles of being young and undocumented, click here.