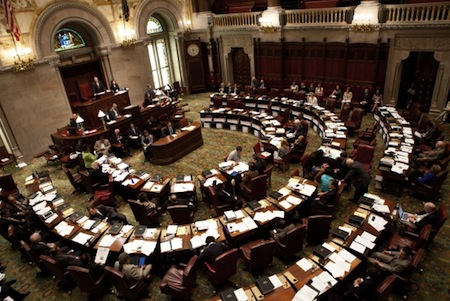 After a week of wrangling in the New York State Senate, the Marriage Equality Act passed tonight by a vote of 33-29, a major victory for LGBT-rights supporters both in New York and across the country.

The New York state senate has passed Governor Andrew Cuomo’s Marriage Equality Act by a vote of 33-29. All Democratic senators but Bronx pastor Ruben Diaz, Sr. (who spoke vehemently against the measure) voted to support the measure. They were supported by Republicans Roy McDonald and James Alesi, who had announced their intentions to support the bill before the vote, and also Steve Saland, who spoke at length about his decision, and said, “I hope that my parents would be proud.” Mark Grisanti, too, spoke touchingly about his change of heart. The latter group had held out for alterations in the bill designed to offer increased protections to religious groups who object to same-sex nuptials. Those amendments were agreed upon Friday afternoon and passed in the assembly 82-47 in the early evening. Once the bill is signed by the governor, New York will become the sixth and largest state to legalize marriage for gay couples, more than doubling the number of self-reported gay couples allowed to marry in the United States. It joins New Hampshire, Massachusetts, Connecticut, Iowa, Vermont and the District of Columbia, which variously legalized marriage equality through the legislatures and through court rulings.

But the fight for the rights of LGBT couples in the immigration system isn’t over, according to a statement issued by the national LGBT immigrant rights group Immigration Equality.

All of us at Immigration Equality, and the Immigration Equality Action Fund, join our families, supporters and allies in celebrating today’s historic vote in favor of full marriage equality for lesbian, gay, bisexual and transgender couples.  New York joins five other states – plus the District of Columbia – in respecting the commitment and union of all families.  We applaud lawmakers who, quite literally, worked overtime to make this legislative victory possible.

As more and more states recognize, and respect, our families, pressure continues to grow for the federal government to repeal the discriminatory and unconstitutional Defense of Marriage Act (DOMA).  A majority of the American people support marriage equality, and want to see LGBT families given the respect, and legal protections, they deserve.

Until DOMA’s demise, however, the victory in New York is bittersweet for families facing separation because of our country’s immigration laws.

Immigration benefits – including the ability of an American citizen to sponsor their spouse for residency here in the U.S. – are purely federal.  Because DOMA prohibits conferring any of the more than 1,000 federal benefits even to couples who have a marriage recognized at the state level, the estimated 5,000 families in New York with one non-resident partner still face painful, and unconscionable, choices as they fight to remain together.

As our legal director, Victoria Neilson, noted earlier this year, “DOMA is still in force and will continue to bar federal government agencies – including the ones that control immigration – from recognizing valid marriages.”  (See our full FAQ on marriage and immigration, online here.)

Even today, our legal team is working to assist married New York couples as they face painful separation.  As the Daily News reported earlier this year, Long Island residents Edwin Blesch and his South African husband, Tim Smulian, could be torn apart as early as next month.  Despite being legally married in South Africa — and despite the fact that their marriage has been recognized by New York for some time — Edwin has few legal options for keeping Tim in the United States.

As we celebrate today’s progress in New York, we also re-commit to fighting for DOMA’s repeal.  Until the federal government follows in the footsteps of states like New York, and provides equal protection to our families, couples will continue to be separated.

Make no mistake, though.  Hope is here, and change is on the horizon.  A recent memo from Immigration & Customs Enforcement may offer an option to fight for an end to the removal of LGBT immigrant spouses. And our policy and legal teams are continuing to work with the Administration to bring about a moratorium on the separation of our families.

Until every family has an option to remain together, however, we will not rest.

(If you are married, or thinking of marrying, and have questions about how doing so may impact your immigration situation, contact Immigration Equality’s legal team via our website.)