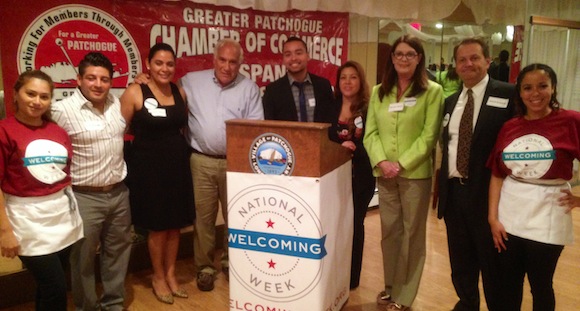 Last week, Welcoming Long Island joined other Welcoming America partners and affiliates across the nation to celebrate National Welcoming Week 2014. More than 13,000 people in 27 states came together in recognition and celebration of the spirit of unity between immigrants and U.S.-born Americans.

As part of National Welcoming Week 2014, Welcoming Long Island held three events that have important implications for the future of the welcoming movement on Long Island.

The purpose of National Welcoming Week, now in its third year, is to highlight the rapid growth of the welcoming movement that is sweeping across the United States and recognize the contributions of our new immigrant neighbors in our local communities. Regardless of the divisive politics that emanate from Washington D.C., more Americans than ever are coming together to help build stronger, and more unified communities that are welcoming to all.

To kick National Welcoming Week off, Welcoming Long Island and the Greater Patchogue Chamber of Commerce’s Hispanic Business Leaders Group co-hosted the first Economic Prosperity Through Welcoming Immigrants dinner on Tuesday, Sept. 16. The dinner was held at the Gallo Restaurant, an immigrant-owned Colombian restaurant on Main Street in Patchogue.

The Village Of Patchogue has been lauded for its recent economic prosperity. Part of that success is attributed to the immigrant-owned businesses that are the lifeline of the Village of Patchogue. The event highlighted how, by supporting businesses like Gallo Restaurant, the village is helping to create local leaders that continue to uplift the immigrant community and mold future leaders in the community.

County Executive Bellone, over the past three years, has truly demonstrated leadership among local government leaders across the nation in creating welcoming communities where everyone, including immigrants can thrive and prosper. Thanks to his leadership and vision for Suffolk County, more Long Islanders than ever before are working to combat tensions, misplaced fears, about our new immigrant neighbors in Suffolk County.

Welcoming Long Island would like to thank County Executive Bellone for his continued leadership and efforts in making Suffolk County a region that is welcoming to all, immigrant and U.S.-born alike.

On Friday, Sept. 19, Welcoming Long Island and Long Island Jobs With Justice co-hosted a groundbreaking interfaith prayer service and press event titled, “Whoever Welcomes Children Welcomes Me.” More than a dozen faith leaders from across Long Island came together in solidarity to call on Long Islanders to show compassion for the Central American refugee children resettled on Long Island. The event came as a direct response to the uproar from Commack residents over a local church’s proposal to take some of the refugees in.

With more than 140 attendees and media present, the event represented the largest gathering of faith leaders on Long Island. The all-star line up of faith leaders showed incredible passion, courage, and commitment as they each stepped up to the microphone to deliver their remarks on the importance of being welcoming to one another, and calling for compassion for the immigrant children.

It was a powerful event full of prayers, reflection, and even singing at times, as the faith leaders coalesced around the concept of using the welcoming message as the engine to alleviate the recent tensions. They also collectively emphasized the importance of reaching across the aisle in order to work strategically to address mutual concerns about our refugee children.