In the days leading up to an immigrant rights rally at Nassau Community College on Thursday, some of the speakers started having second thoughts. A few considered backing out; others were so nervous that once the moment arrived to address the crowd of several dozen of their peers, they began to cry.

These weren’t typical public-speaking jitters. For several students from across Nassau County, the event marked the first time they would openly say that they didn’t have legal status in this country, that they were undocumented.

“Every day I see others take for granted life’s simple pleasures, such as taking a drive or going to work,” said Gül Berktaş, a 19-year-old student whose parents brought her to Long Island from Turkey nearly eight years ago. “I am capable of achieving so many more great things—we all are—all we need is the opportunity to show it.” 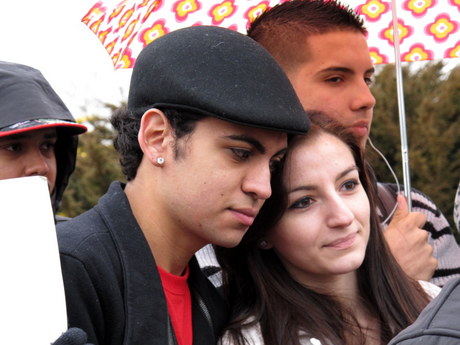 Gül Berktaş (right) with Joaquin Villalobos. Both students spoke of the trials of being young and undocumented on Long Island. (Credit: Ted Hesson)

Berktaş, like several others at the rally, decided to share her immigration status to help raise awareness about the need for the legislation to aid undocumented youth. The event was part of a statewide push for the New York Dream Act, legislation that would help undocumented students obtain state financial aid for higher education. It was organized by the Long Island Immigrant Student Association and the Student Organization of Latinos, a campus group.

In the short video below, two of the students who spoke at the rally explain why New York should help make it possible for undocumented youth to more fully contribute to their communities:

Here’s a summary of the legislation from the New York State Youth Leadership Council, which has been at the forefront of the issue:

The bill, as currently amended would allow undocumented immigrants who enter the US before the age of 18, are below the age of 35, reside in New York for at least two years, graduate with a high school diploma (or its equivalent), and have no felony convictions to be eligible for state- and city-funded financial aid programs which include grants, loans, and scholarships available within the State of New York. 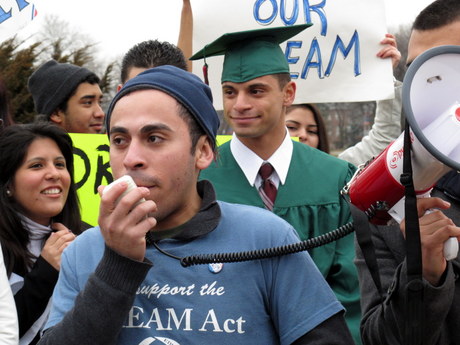 For Gül Berktaş, going public with her immigration status was particularly difficult. Her mother was nervous about how her declaration might affect their family, including Gül’s younger brother, who were born in the US and her citizens. But she felt a need to raise awareness about the New York Dream Act, both on her own behalf, and for others.

“Not only are we speaking for ourselves, we are speaking for thousands of students who are afraid to do so,” she said. “We will be their voice.”

Watch a slideshow with images from the rally: