The killing of two men who tried to intervene to protect two young women on Friday, May 26th, is even more horrible and dangerous than it seems.

Taliesin Myrddin Namkai Meche, 23, and Ricky John Best, 53, gave their lives protecting the women after Jeremy Joseph Christian, a white supremacist, began accosting them on a light-rail train in Portland. A third man, Micah David-Cole Fletcher, was seriously wounded. The three men are rightly being hailed for their bravery in coming to the aid of the victims of violent Islamophobia. We should all hope that we have the courage to intervene when hatred rears its head. But I am not here to write about these heroic men or the two women whose lives they saved. I want to address something other than the victims’ personal courage and the Portland community coming together.

A decade ago, if someone spouting White Nationalist beliefs committed a heinous crime, others on the far-right would head for the hills until things cooled off. Things were different after this double homicide in Portland. Anti-Muslim Alt-Right groups sought permits for not one, but two rallies in Portland, crowing that they were taking their message to “one of the most liberal cities in America.” This, the day after the hate-killings.

Kyle Chapman, a self-described “nationalist,” called for one of the rallies in Portland. Chapman is a leading figure in the Alt-Right paramilitaries. He said that the rally would be a “Free Speech Pro-Trump Rally.” He is not a man known for non-violent protest. Chapman posted recently that he wants to usher in “a resurgence of a warrior spirit to Western Society.” In April of this year, he started the Fraternal Order of Alt-Knights, a group of armed men willing to use violence to “back-up” the racist Alt-Right.

Don’t think of Chapman as an exotic West Coast phenomenon. According to his Facebook page, Chapman was on Long Island on May 26, 2017, following an anti-Muslim rally in New York City organized by Milo Yiannopoulos. In reviewing Chapman’s Facebook page, I saw several Long Island supporters trying to arrange meetings with him.

Chapman uses the nom de guerre “Based Stickman.” “Based” is an Alt-Right phrase that means “True to oneself and uncaring of others opinions.” “Stickman” comes from his frequent appearances at rallies in armor, with a helmet and shield and a club (“Stick”) to beat his opponents. Here is a photo of Chapman: 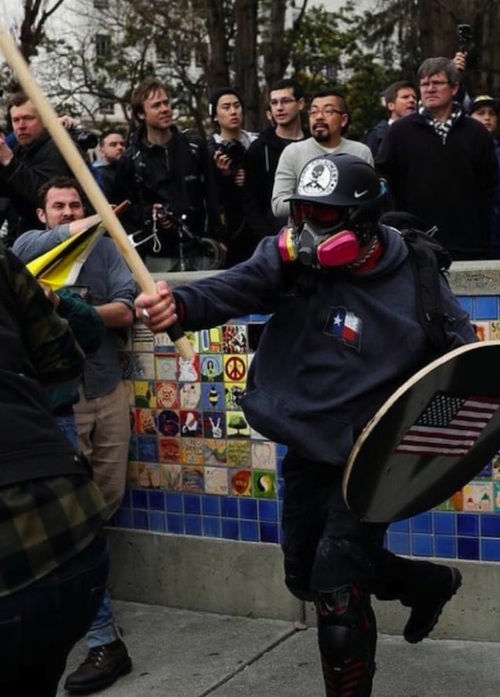 The militarism in this rising Alt-Right leader is obvious. Chapman has taken to addressing his 31,000 Facebook followers as “My troops, patriots, freedom fighters, and warriors.” At one Trump rally alone, he was charged with “felony assault with a deadly weapon, carrying a concealed dirk or dagger, assault with a taser, and assault with pepper spray,” according to the New Republic.

This erasure of decency and descent into violence is something that we need to begin to address. Portland’s mayor has refused to allow the hate-groups to march in so soon after the killings, but they will be back.