Back in 1987, I went to El Salvador on behalf of CARECEN to investigate conditions after the earthquake that had struck the nation. But we were not just interested in those who lost their homes in the natural disaster, as many more had been uprooted by the war.

We went to a displaced persons camp run by the Lutherans, located north of San Salvador, the nation’s capital. Travelling through the rural zone, we heard a helicopter overhead slowly following us. When I realized that its guns were trained on our slow moving pickup truck I began to understand what everyday life and death was like for Salvadoran civilians. A teenager with his finger on the gunship’s trigger, likely drafted against his will, could determine whether I ever saw my wife again.

When we got to the camp, we found hundreds of people from other camps assembled there. The camp was called Fe y Esperanza, “Faith and Hope,” and the refugees there were hopeful that their ordeal of living away from their homes was nearing its end. The camp had been set up in 1982 by the Lutheran Church and it was filled with 700 refugees who had fled from their own country’s army. There were tens of thousands of displaced people in other camps around the country too. Representatives from other camps were meeting at Fe y Esperanza to discuss how they could plan their return to their villages.

The people who filled the camps were mostly women and children from rural villages. These campesinos were from poor families of indigenous background whose ancestors had lost their communal land to the country’s white overlords. An oligarchy of wealth, sometimes called the Fourteen Families, ran the giant coffee plantations, or fincas, which supplies the U.S. and Europe with one of the most valuable agricultural commodities in the world. The campesinos were forced to work on the plantations by laws that required the arrest of rural workers who did not have a contract to labor on a finca. When the coffee workers tried to organize, the union activists were simply murdered. Companies like Folgers were among the beneficiaries of this bloody labor market.

The refugees in the camps were typically from families in which the men had been killed or who had fled to the mountains to join the guerillas. For some of them, their villages had been destroyed by the army in retaliation. 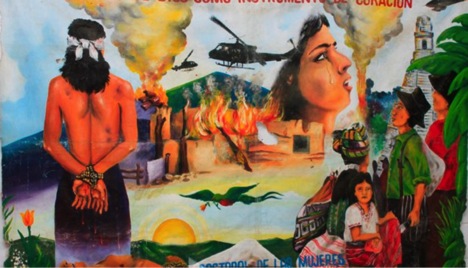 This mural at Fe y Esperanza depicts the destruction of rural communities during the Salvadoran civil war. The U.S.-supplied helicopter became the dark symbol of impersonal mechanized death visited upon the country’s poor.

Hundreds of delegates from the camps met on a flat plain under a tarp made from sheets. They began with prayers for an end to the war and injustice. Then they began to talk about what must be done if they were to ever go home. All the while, off in the distance, we could hear the dull thuds of explosions. Periodically the rapid fire sounds of machine guns and automatic weapons interrupted the discussions.

Then we heard children playing near the gate to the camp begin to scream. Everyone looked concerned. An armored personnel carrier brimming with machine guns had pulled in front of the camp’s entrance and members of the feared Guardia Nacional forced their way into the compound. As fear gripped the audience around us, some quick thinking student actors from the university jumped on stage and began leading the crowd in a giant game of Simon Says.

“Simon Says shake your head,” they commanded and we all did as fourteen Guardia surrounded us. When the Guardia’s commander ordered his men to aim their M-16 assault rifles at us, the students ordered us to “jump up and down on one leg.” Knowing that the soldiers would at least hesitate to massacre a crowd that included Americans, our Long Islanders ran over to the commander with our U.S. passports raised like shields in front of us. We told him he had to leave. In the background we could hear a commotion as “Simon” ordered the people to laugh at the top of their lungs.

Reluctantly and with an air of disgust, the officer ordered his men to file slowly out of the camp. 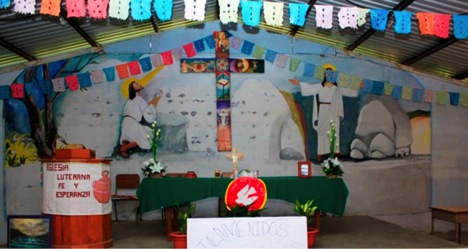