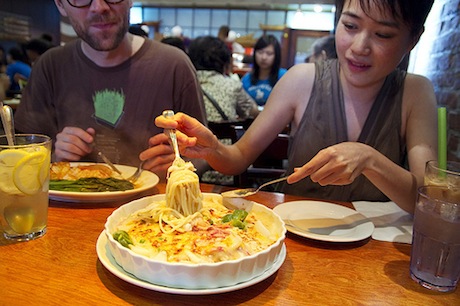 A combination of Chinese, Russian, Mexican, and Italian immigrants are mixing it up in Bath Beach, Brooklyn.

Home Reporter News reports that the once Italian neighborhood is changing, and some locals say in many ways it’s for the better.

Although neighboring blocks have an increasing number of storefronts in Cyrillic, Mandarin and Cantonese, Bath Avenue between 17th Avenue and Bay 14th Street – though it has also changed — still has plenty of old-timers who remember what the ‘hood looked like way back when residents were overwhelmingly Italian-American.

“It’s definitely a change, but that doesn’t mean it’s bad. I am seeing it coming back with new people and new businesses,” Junior explained, adding that there are new Chinese learning centers on both sides of the block, a new car service, an eyeglass shop and two hookah bars,” said Phil, the owner of Junior’s Wine and Liquors, He said that business is still holding on, but he is thinking about retiring. “It was very busy over the holidays but it has slowed down – this is kind of a luxury store,” Junior said. “I had a customer walk out because I didn’t speak Russian, but you can’t help it. That’s just the way things are.”

Dolinsky Pharmacy, which has been on the corner of Bath and 17th Avenues since 1916, is still thriving. “The neighborhood changed – when we came here 40 years ago, it was 99 percent Italian,” said pharmacist Ira Wiener, who has been working at the store since the 1960s.

“Now it’s Asian, Russian and Mexican. We just have to adapt to the new culture,” Wiener went on. “Business is still good – it’s still a nice, small neighborhood.”