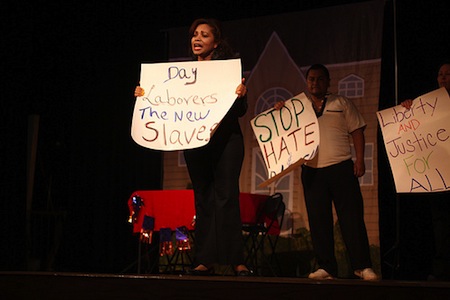 On stage, a diverse group of performers depicted acts of anti-immigrant violence, including a dramatization tied to the November 2008 killing of Ecuadorian immigrant Marcelo Lucero.

But there was just as much dramatic tension off-stage at last night’s performance of “What Killed Marcelo Lucero?” in Patchogue.

After the theatrical segment of the play, director Margarita Espada – whose theater group Teatro Experimental Yerbabruja produced the play and who is also the organizer of our Welcoming Long Island campaign – encouraged audience members to publicly express their thoughts related to the performance, with the interaction moderated by a panel of advocates.

Unexpectedly, one of the people to approach the microphone was Bob Conroy, the father of Jeffrey Conroy, the Medford teen who stabbed and killed Lucero in the midst of a series of hate-motivated attacks against Latinos.

With a voice at times trembling with emotion and booming with anger, Conroy insisted that his son wasn’t a racist, despite evidence to the contrary presented at his son’s trial, including a swastika tattoo and a pattern of group attacks against Latinos.

“I’m sorry for what’s happened, but I feel that the problems of a nation fell on a 17-year-old child,” Conroy told the audience. He later added: “This kid got more press internationally than Jeffrey Dahmer did…He was 17 years old, he could have been anyone’s child.” 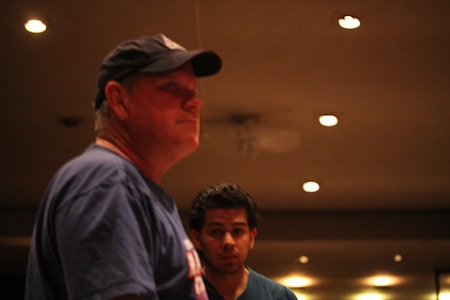 Conroy stopped short of declaring his son’s innocence, more so asserting that Jeffrey was unfairly labeled a white supremacist by the media.

“I have plenty of friends who are Spanish, black, white,” Conroy said. “[The hate] has got to stop, know the facts before you label somebody.”

Upon admission to jail after the killing, Jeffrey Conroy told jail personnel that his parents held racist views and that he visited white supremacist websites, although those statements never surfaced during his trial.

Directly after Conroy finished speaking, another audience member responded that Conroy’s claims were attempts to revise history, ignoring the established facts of the case against his son.

Luis Valenzuela, one of the advocates on the panel and the director of the Long Island Immigrant Alliance, stressed the role that Long Island politicians played in stirring up hate against Latino immigrants. “Political leaders here got national attention from their anti-immigrant sentiment and their laws,” he said.

While Suffolk County Executive Steve Levy isn’t named directly in the play, the dialogue of one character, a politician, draws largely from Levy’s own quotes on illegal immigration. 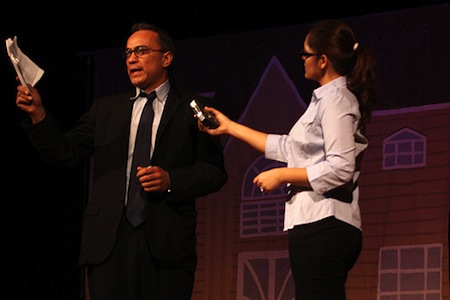 Long Island Wins Director Maryann Sinclair Slutsky was one of the panelists moderating the discussion, and at the close of the evening, she commended the tone of the dialogue, which remained civil and open despite ideological differences.

“I know there was controversy about it being shown here today, but we have been able to keep the dialogue going.”