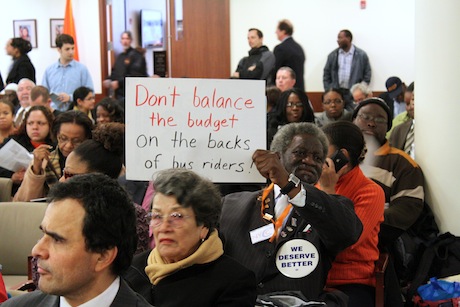 At a hearing at the Nassau County Legislature on Monday, hundreds of Nassau residents vehemently voiced their opposition to the privatization of county bus service, saying that the county government was balancing the budget at the expense of bus riders.

A day later, Veolia Environment SA, the transportation’s parent company in Paris, announced that it plans to sell off its transit holdings in an effort to try to revive company stock. Had the contract with Nassau County already been approved—it’s scheduled to come to a vote in the Nassau legislature on December 19—the county would be stuck working with an unknown entity.

How could a deal this rotten come so close to consummation? Either Mangano and company didn’t do the research on Veolia, which is a scary thought; or they knew that Veolia Transportation was a failing entity and decided to take the deal anyway—even scarier.

In Newsday, Legis. Kevan Abrahams (D-Hempstead) suggests that Veolia officials might have known about the sell-off when they met with residents on Monday. “The perception was that these guys were there on Monday night, and this bomb drops on Tuesday morning,” he said. “And they did not mention word one about this.”

The better question is why county officials seemed to have no clue, or not care, about the state of Veolia when they put this agreement on the table in the first place.

Now Mangano is looking at other companies that might be able to take over Nassau bus service, but the dangers of privatization couldn’t be clearer. The proposed contract with Veolia would have wedded the county to an unknown third-party company out to make a profit (and it still might if the legislature votes for it in two weeks).

As long as the county’s goal is to cut costs and not to protect the interests of bus riders, the next deal will be just as dicey.