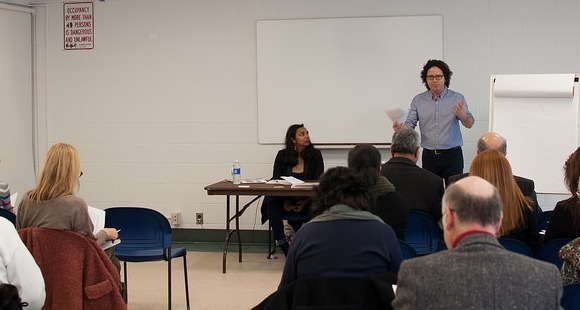 On Feb. 26, more than 300 Long Islanders representing a wide cross section of professional services, along with advocates, organizers, and elected officials, gathered at Hofstra University for Long Island Wins’ summit on immigration.

The summit program included seven breakout sessions that allowed attendees to participate in the development of action steps for the future of immigrant inclusion and integration on Long Island. Each group focused on an important aspect of immigration—healthcare, immigration law, media, education, economy, government, and advocacy.

In an effort to share the results of the summit and its breakout sessions with all the attendees, those who were unable to attend, and the greater Long Island community, Long Island Wins is creating a working group for each breakout session. These groups will continue the conversations started at the summit and build on the action plans to develop tools and resources that others can apply in their work and daily life.

This article is the first in a series that will outline the action steps developed in each session at the summit and how others can participate in the conversation moving forward. We will start with the media session.

In this session, co-facilitators Thanu Yakupitiyage, communications coordinator at the New York Immigration Coalition, and Mario Murillo, a professor at Hofstra’s Radio, Television, Film department and a co-director for Hofstra’s Center for Civic Engagement, outlined the major challenges faced when it comes to building up the voice of Long Island’s immigrant community and sharing stories and information with the rest of Long Island and the U.S.

For example, some attendees noted that too few Spanish language media outlets do a good job of tackling critical issues like immigration and actions in Congress that affect the immigrant community. Many also noted the insufficient presence of ethnic media on Long Island, as well as difficulty in working in a region that has only one local daily paper.

Perhaps the biggest and most critical challenge was that too much attention is given in the media to the elected officials over those who live the issue every day. Resolving this was the main focus of the session.

The workgroup developed the following action steps to help those looking to raise up the voices of the immigrant community:

Build media partnerships through the reporters. Most agreed that one of the key ways to grab the attention of media outlets, both big and small, was to foster positive relationships with those who work the beats.

Break the monopoly/create your own media. In today’s Internet age, there’s less need to rely on mainstream media to capture an audience and distribute stories. There are lots of free (or low-cost) tools that can help individuals and organizations start their own news site, blog, or podcast. And the content generated can easily be distributed via social media and email lists. In addition, Public Access programming remains a viable option for some.

Partner with local schools/universities. This can be done both to share stories and educate, as well as to build a pool of volunteers and fellow advocates.

Leverage social media. Although it was mentioned already, social media is an important tool for distributing messaging and stories. It can also be used to engage news outlets and reporters, and for reaching out to the youth.

These action steps are only the beginning. If you’d like to participate in the Media Working Group, please contact Christian Bonawandt at cbonawandt@longislandwins.com.