As the race for Suffolk County executive heats up, you can expect Democrat Steve Bellone and Republican Angie Carpenter to become increasingly open about their positions on the range of issues important to voters.

In regards to immigration and education, that dialogue began on June 3, when Bellone, who is currently Babylon town supervisor, outlined some of his views at a candidate forum in Manhasset.

Carpenter, who is the Suffolk County treasurer, could not attend the event since she had only been nominated the previous week, organizers said. Before publishing this post, Long Island Wins contacted Carpenter’s office with several interview requests by phone and email, but those requests were not answered at the time of publication.

The candidates forum was part of a symposium entitled “Advocacy, Engagement, and Leadership: Changing the Landscape in Suffolk County,” which was presented by the Hagedorn Foundation and hosted by the Unitarian Universalist Congregation at Shelter Rock. 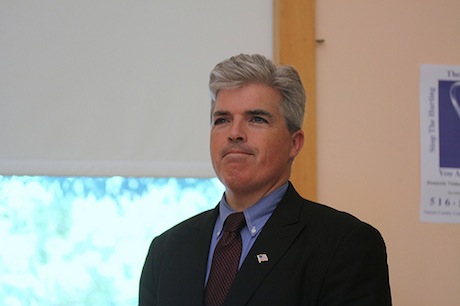 Steve Bellone waits to speak at a June 3 event. (Credit: Ted Hesson)
Since Carpenter did not attend the event, Bellone took to the podium alone to answer questions about immigration and education from moderator Serge Martinez, a law professor at Hofstra University. [Scroll down to watch the video.]

While Bellone stressed that he would look to change the tone on immigration in Suffolk, he did not delve into specifics.

“I think that public officials have almost a solemn obligation…to not only work to bring people together, but to work to calm things down,” he said. “That is our role, that is part of our role…Unfortunately, I think that there are politicians who view situations like immigration as an opportunity to raise their political prospects, and I think it is an incredible shame that anyone would exploit people and vilify people, and, in fact, harm whole communities for their own political advantage.”

The Democratic candidate for office spoke about the blight of hate crimes in Suffolk, and implied that in the past such crimes had been whitewashedby county leaders.

Bellone also answered some specific questions about education policy and programs in the county, including the July 2010 closing of Jack Abrams School in Huntington Station. The school was shuttered after a faction of parents clamored for the 340 sixth-grade students to be relocated as a result of fears about violence in the area.

“We had a school in Huntington Station that closed down because of law enforcement issues,” Bellone said. “That should never happen in this county, that is a disgrace. And I think part of the problem is that we have an administration currently that when you see what’s happening in Huntington Station and communities like it across our county, they’re viewed as media problems or perception problems that you have to attack through the media by announcing new initiatives and holding press conferences. I look at what is happening in Huntington Station and communities across the county, and I view them as actual problems that need to be solved by the application of resources, and effort, and time, and energy.”

In the coming weeks and months, Long Island Wins will continue covering the race for Suffolk County Executive.

Watch the complete 30-minute question and answer session with the Democratic candidate for county executive: