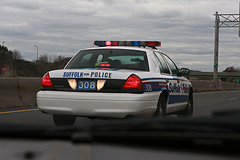 UPDATE: Det. Lt. Hernandez told Newsday in a January 30 article that his Spanish was “a little rusty.” Newsday also noted that Hernandez has used a Spanish translator in the past.

Since the November 2008 killing of Ecuadorian immigrant Marcelo Lucero, the Suffolk County Police Department has faced national criticism for its hate crime reporting, or lack thereof.

Amid the scrutiny, which includes an ongoing federal investigation into the county’s policing of crimes against Latinos, the police department and Suffolk County Executive Steve Levy have consistently denied any inadequacies in the handling of bias crimes.

However, a change in leadership within the hate crimes unit on January 7—replacing Det. Sgt. Robert Reecks with a Spanish-speaking officer of a higher rank—serves as a de facto acknowledgement of deficiencies.

“We upgraded the position to detective lieutenant. It’s a very important unit, like homicide and special victims,” he said. “He’s a competent commander and this will add another dimension to that unit.”

Newsday also interviewed a Suffolk police official who spoke of the increase in reported hate crimes in recent years, a trend that supports theories of past underreporting.

A Suffolk police official last week said Lucero’s death and its aftermath led to a nearly 30 percent jump in hate-crime reports in the county.

The news of the leadership upgrade comes after a week when the Levy administration was accused of inappropriately editing a report on hate crimes by the Suffolk County Hate Crimes Task Force.