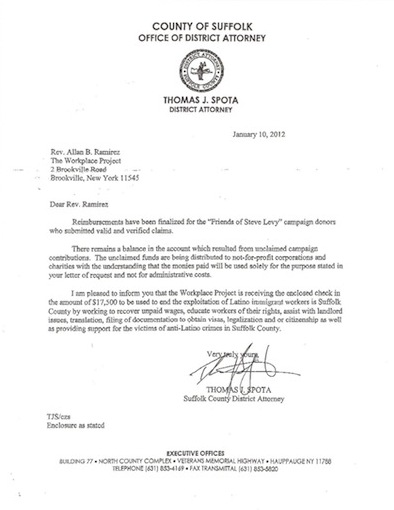 He supported policies that marginalized immigrant communities, like an attempt to authorize Suffolk police to act as immigration officials. After the 2008 hate-crime killing of Ecuadorian immigrant Marcelo Lucero, he callously referred to Lucero’s death as a “one-day story.”

Now Levy is inadvertently donating $17,500 to the Workplace Project, an immigrant rights organization that he would have once derided as a den of “anarchists” and “communists.”

Is the former exec going all Karl Marx on us and embracing wealth redistribution? Not quite.

When Levy was busted for using questionable fundraising tactics last March, he turned over his $4.3 million campaign war chest to the Suffolk County District Attorney’s office. Some Levy donors asked for their money back, but not all of his campaign cash has been claimed.

According to Telemundo, immigrant rights activist Reverend Allan Ramirez advocated for a portion of the unclaimed funds—$17,500—to go to the Workplace Project, a group that fights for the rights of Latino immigrant workers on Long Island.

Omar Angel Pérez, the executive director of the Workplace Project, says the money will go to support ongoing initiatives.

“We’re going to continue educating and organizing our community in Suffolk,” Angel Pérez says. “And this will help us to educate the community to prevent them from being victimized.”

Does it seem strange that the money came from a politician who openly backed immigration raids in Suffolk and referred to those in opposition as the “one percent lunatic fringe”?

“It’s completely ironic,” said Angel Pérez. “But we’re happy. The money is going to serve a good purpose and a good end…things like this should happen more often.”

Click here to watch a Spanish-language report on Telemundo showing members of the Workplace Project as they receive the check from Rev. Ramirez.