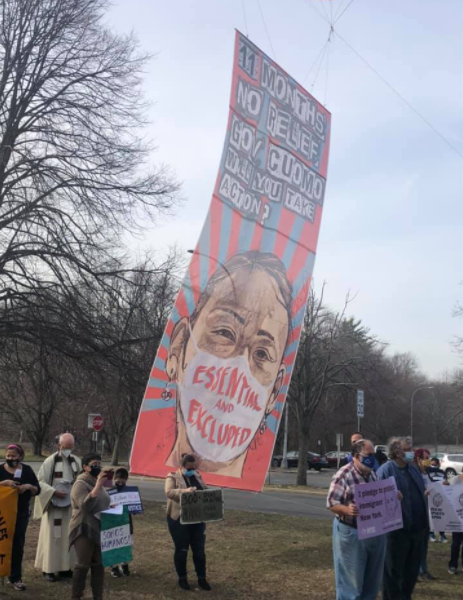 The $2.1 billion Excluded Workers Fund is a long overdue income replacement program for New York’s estimated half a million excluded workers who have been ineligible for Unemployment Insurance and excluded from any economic relief for nearly a year.

○ COVID-related death or disability of a breadwinner or major household source of income; ● Not be eligible for Unemployment Insurance or federal COVID-related income relief; and

Tier System: Workers will be eligible for one of two tiers of benefits:

○ To be eligible, workers must:

■ Have filed a tax return for tax years 2018, 2019, or 2020 using a valid ITIN number; OR ■ Provide a letter from an employer showing dates of work and why they’re no longer employed; OR

■ Provide at least six weeks of pay stubs/wage statements from the six months prior to when the worker became eligible for benefits; OR

■ Provide a Wage Theft Prevention Act (WTPA) Wage Notice given by employer at time of hiring showing a worker was employed in the six months before becoming eligible for benefits.

○ Note: The budget allows the Department of Labor Commissioner to establish “alternative documents” that show workers were employed and paid for at least six weeks in the six months before becoming eligible for benefits.

If applicants are not eligible for Tier One funding, they can qualify for Tier Two.

○ In addition to demonstrating proof of residency and identity (see below), the Commissioner of Labor is charged with creating a point system including documents such as pay stubs, wage statements, bank statements or receipts demonstrating a pattern of payments, to determine work-related eligibility.

Avoid Scams Applications are not yet available. The State must create a new program to distribute the funds. Do not hire a private attorney or any other person to apply for the fund. New York State government and nonprofit organizations will announce when the program is open for applications.

What documents should I prepare?

Proof of Residence: Applicants can prove residency with the following:

○ Copy of a utility bill

Proof of Identity: Applicants use a point system – to be eligible, you need four points:

○ Diploma or transcript from a high school, college or university in the US

This was prepared by the New York Immigration Coalition and translated versions will be posted as they become available.